London Buses: Typical - two consultations come along at once 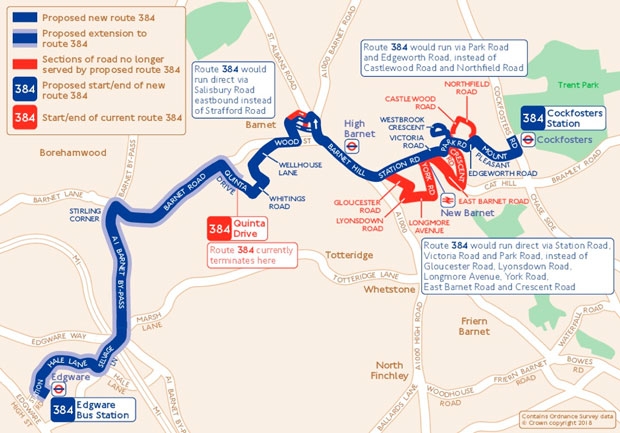 What do these changes mean for the residents of Barnet?
The Barnet Society have been asked to comment on the proposal by Transport for London (TfL) to change the 292, 384 & 606 bus routes and a bus stop on Barnet Hill. We have also been asked about reductions on bus routes in Inner & Central London.

Society members Peter Bradburn (a former transport consultant), Robin Bishop & I have considered these proposals and have a number of comments. Before finalising our submission to TfL, however, we would very much like to hear from you, particularly on the local changes.

Our comments encompass a number of factors not mentioned in the TfL consultation, but of which we are aware and which have a direct relevance to the area of Barnet.

The 384 route changes are the most relevant to our members. The principal ones are to:
1/ extend the route from the current terminus at Quinta Drive to Edgware bus station, via Arkley and the A1; and
2/ alter the 384 route in New and High Barnet, thus making it more direct.

What do these changes mean in detail for the residents of Barnet?

This would mean that the Greater London Authority’s and transport authorities’ objective that no-one should be more than 400 meters from a bus route would in some cases not be achieved on these roads. In addition, the precise new route through High Barnet needs to be clarified, since this is unclear from the information supplied.

Other bus routes would be altered and have their frequency altered. TfL say these route alterations would result in the 384 being a more direct service along the present route, and avoid some duplication of route with the 326. It would also offer a much more direct route to Edgware than the 107.

1/ Part of the TfL proposals is to reduce the number of buses operating on the 606 route, which runs (on schooldays only) between Queensbury and The Totteridge Academy. At present three buses per day run in each direction, running at two-minute intervals in the morning TO The Totteridge Academy, arriving at 08:14, 08:16 & 08:18, and at 15:15, 15:35 & 15:45 in the afternoons FROM the Academy.

The reduction would remove some of these buses, although TfL say they will review future transport needs as Ark Pioneer Academy (soon to be built off Barnet Lane) and possibly other schools in the area expand.

This would run along part of the 107 route through Arkley and could reduce patronage on this route for passengers travelling to Edgware, since the proposed 384 route to Edgware would be more direct.

However, the TfL proposals make no mention of the UnO route 614, which also runs from The Spires towards Edgware via Arkley and Apex Corner. Perhaps since these buses do not operate along the High Street, do not accept Oyster cards (and are not painted London Transport red!) they are not to the fore in passengers’ minds when travelling to Edgware.

Nevertheless they already offer a quick and reliable service and, in addition, serve Edgware Hospital. This should have been factored into the proposal.

3/ The changes in the 384 route in New and High Barnet would mean a number of properties no longer being within TfL’s target distance of 450 metres from a bus route (and it should be noted that this distance has already been increased from 400 metres), so those with mobility problems living along the 384 route may feel disadvantaged by this proposal.

Against this one has to weigh TfL’s comments that some of the 384 route is already duplicated and the route changes would speed up the service. But it is not completely clear exactly which roads the 384 would serve in the High Barnet area, or how this would impact on the “hail and ride” sections of the route.

4/ The final proposal is to move bus stop Q (served by buses travelling UP Barnet Hill, between Milton and Bedford Avenues) from its present location to one BELOW the pedestrian crossing, opposite the bus stop at the top of the High Barnet Station access road. 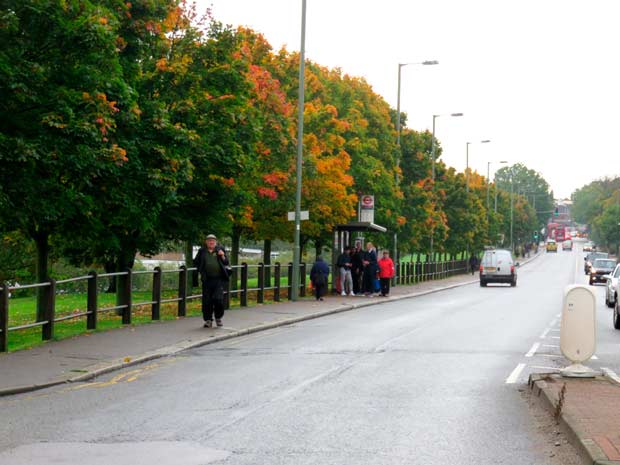 Barnet Hill seen from the junction with Underhill. The proposed new bus stop would be about halfway up the hill.It is unclear from the proposal if the new stop would be a lay-by, as bus stop Q currently is, or whether buses would simply stop in the near lane, as they do at the bottom of the hill.

We would prefer the latter, because a lay-by would remove part of the line of trees that the Society got planted 20 years ago, and which look more splendid as every year goes by.

What effect (if any) this would have on the bus stop at the junction of Underhill and Barnet Hill?

Given the number of services along Barnet Hill, there is also the question of buses waiting at the new stop, which could obstruct the pedestrian crossing.

This would need to be given a high priority when considering this part of the proposal.

In summary, some of these changes would no doubt be seen as an improvement to the 384, such as its extension to Edgware.

However, in our view a number of factors pertaining specifically to Barnet have not been given proper consideration, such as Ark Academy’s transport needs and patronage of the UnO 614.

We would like to hear the opinions and thoughts of as many members of the Society as possible before submitting our comments to TfL.

Please email them to This email address is being protected from spambots. You need JavaScript enabled to view it. or post them on our website by Thursday 18th October so that we can finalise the Society’s response by TfL’s deadline. You can also submit them direct to TfL.

Further information on TfL’s proposals for Barnet can be found at:
https://consultations.tfl.gov.uk/buses/route-384/
TfL’s deadline for online comments is 9th November.

TfL are proposing to make changes to 33 bus routes, including alterations to night services and the introduction of a new route. These routes run across London, but the majority of changes take place in Inner & Central London.

These proposed changes are claimed to help make the bus network simpler and more efficient and ensure that TfL’s resources are invested in the right locations.

Since the net effect would be a reduction of services in Inner & Central London, the Society’s main concern is that Outer London – which is more dependent on buses, and where considerable development is expected over coming years –  should benefit from at least some of the savings.

Further information on TfL’s proposals for Inner & Central London can be found at: https://consultations.tfl.gov.uk/buses/central-london/?cid=central-london-bus-consultation

More in this category: « Putting the Battle of Barnet on the map for historical tours Pledges needed for Medieval Festival »
back to top