New site of Battle of Barnet? 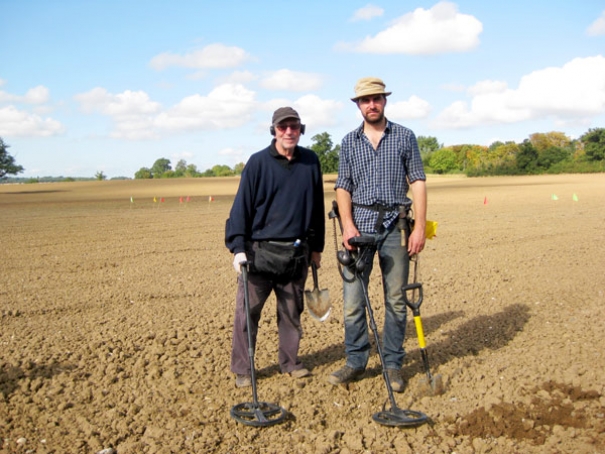 Sam Wilson, the military archaeologist leading a year-long metal detecting survey, says nothing has been found so far that could be positively linked to the battle, but he remains optimistic that he and his team of volunteers are working in the right area.

Two lead ram shot that were almost certainly used in the battle were found previously in the vicinity of the Kitts End Lane area that is now being searched, and this has strengthened their theory.

Mr Wilson is carrying out the investigation under the direction of the celebrated military archaeologist Dr Glenn Foard, of Huddersfield University, which has been commissioned by Barnet Museum to conduct the survey and a possible excavation of the site.

They have both always doubted the accuracy of the suggestion by English Heritage that the battlefield was just to the north of Hadley Green, and Mr Wilson told a meeting of the Barnet Society (29.1.2016) that he and Dr Foard are working on the basis that the battle was fought to either the east or west of Wrotham Park.

In their view the most likely site was to the west of Wrotham Park, which would have been on the edge of what was Enfield Chase. The landscape resembled the area described in the most detailed account of the battle.

“We want to test this theory against the archaeology of the site, and two lead ram shot that were found in the vicinity by a local enthusiast, and which we think were definitely from the battle, do support this thesis.”

“Volunteers using metal detectors are now methodically searching each field, one by one. We are doing it very thoroughly, using the best methodology.

“After searching for two months we have not yet found anything that was definitely from the battle, but you have to remember it took Glenn Foard three years to find the precise site of the Battle of Bosworth.”

Among the finds so far are medieval coins including a Henry V farthing that was in circulation at the time of the battle. Another find was an Elizabeth I sixpence in very fine condition.

“We will continue surveying for the next eight to ten months, and in the case of some of the fields we will have to wait until the summer, after harvest time.”

Mr Wilson said another task later in the year would be to test out suggested locations for the chapel that was said to have been erected after the battle, to commemorate a mass grave.

“We shall dig test pits on the suggested site so that we can either prove or disprove the belief that there was a chapel.

More in this category: « A Barnet business start up that changed the world Right-to-buy almshouses put to rest »