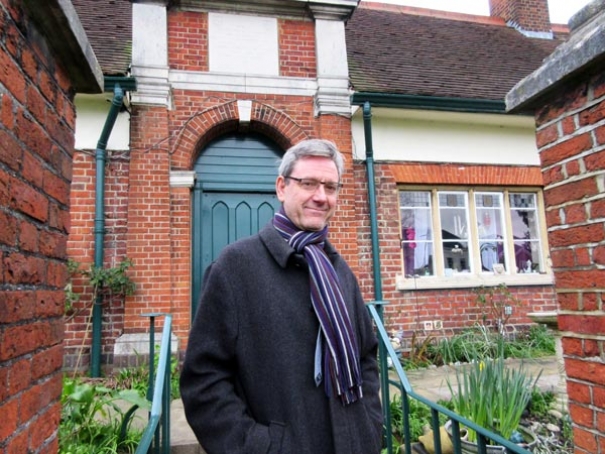 Simon Smith, clerk to the visitors (trustees) of the Jesus Hospital Charity
A question mark hanging over the future ownership of Barnet’s many historic almshouses has finally been resolved after the government gave an assurance they would not be included in the extension of the right-to-buy scheme for housing tenants.

When the government announced last year that homes owned by housing associations were to be included, almshouse charities asked for an immediate clarification, fearing that their properties might have to be made available for purchase.

There are almost 1,000 almshouses within the Borough of Barnet, more than any other London borough, and there are well over 170 within a mile of Barnet parish church, one of the highest concentrations in the country for a town of its size.

Peter White, chairman of the Lancelot Hasluck Trust, which has 44 almshouses off Parkside Gardens, East Barnet, and includes Chipping Barnet in its primary area of benefit, was one of the first local charity leaders to seek reassurances from the government about the future status of almshouse properties.

Simon Smith, clerk to the visitors (trustees), told the Barnet Society that the lack of clarity in the government’s intentions had caused considerable uncertainty.

“We were facing the prospect of government policy breaking up the great historic tradition of benefactors providing homes for elderly and needy people, a tradition that in High Barnet’s case dates back to the 17th Century.”

After months of lobbying by the Almshouse Association, Greg Clark, the Secretary of State for Communities and Local Government, has finally given MPs an assurance that almshouse charities are entities that are distinct from housing associations, and therefore are not included in the right-to-buy scheme.

“Here in High Barnet we have charities that are hundreds of years old, and that are still supporting local residents. There have been almshouses in Wood Street since 1672, and they are an integral, and much-loved, part of our local heritage.

“So obviously it makes sense for the government to respect the fact that almshouse charities are not the same as housing associations, and that they fall outside the right to buy scheme.”

Before the Secretary of State issued his reassurance, there had been months of media speculation that elderly people living in almshouses might be allowed the right to buy their properties, confusion that prompted the Almshouse Association to call on ministers to protect the unique status of member charities.

Most of Barnet’s many almshouses bear the names of the original benefactors, and Mr Smith says it would have been a travesty if the continuing benefit of their generosity years ago was undermined by government action.

“Almshouses still play a significant role in providing accommodation for elderly people of limited means, who are often in housing difficulty, and the 16th and 17th century benefactors who established these charities intended their bequests to provide charitable housing for generations to come.

“One reason why obtaining government clarification was so important is because almshouses are expanding. For example, in response to the growing demand for affordable housing, Jesus Hospital are in the process of seeking planning permission to build some more almshouses in the area, and we were shocked by the thought they might be included in the right-to-buy scheme.”

In and around High Barnet there are four major almshouse charities:
Jesus Hospital Charity is responsible for 54 almshouses (including Ravenscroft’s, Garrett’s, Pagitt’s and Wilbraham’s) on sites in Wood Street, Monken Hadley, Potters Lane and Grasvenor Avenue.

Mr Smith, and the visiting officer for the Jesus Hospital almshouses, Jane Porter, give regular talks on the history of almshouses, and explain why Barnet has benefited so greatly from the generosity of the early benefactors.

“Almshouses are a great British tradition, dating back more than a thousand years, and it is a concept that has been taken up around the world. The first almshouses were established in York in 970 by King Athelstan, the grandson of Alfred the Great,” said Mr Smith.

“Given this great historic legacy, you can see why the almshouse charities were so alarmed when we thought our properties might have to be sold off to residents, so we appreciate the fact that the government has finally listened and cleared up the confusion.”

More in this category: « New site of Battle of Barnet? A chance to see – but not to taste »