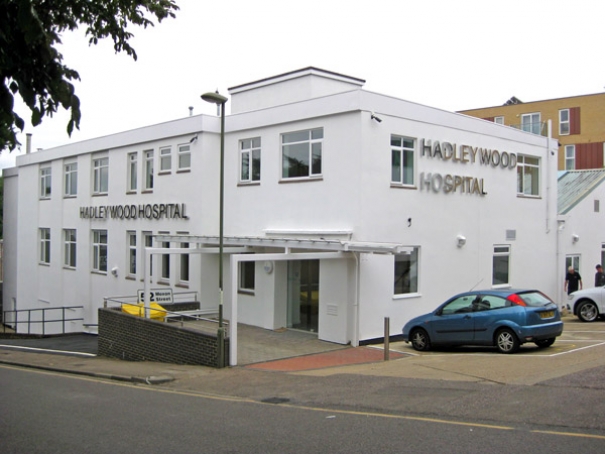 The new Hadley Wood Hospital without the additional two floors
Even before the completion of its fitting out, an application has been made for planning permission to almost double the size of a new private hospital which is to open in Moxon Street, High Barnet.

Hadley Wood Hospital is due to open shortly and will be owned and managed by a team of local specialist consultants.

They aim to treat both private and NHS patients referred to them by general practitioners and provide “high-quality affordable healthcare”.

The two consultants heading up the Hadley Wood Hospital – Dr Howard Stevens, a general dermatologist and skin cancer specialist, and Mr Kaveh Shakib, an oral and maxillofacial surgeon – told the Barnet Society that they have spent their life savings on financing the venture.

Unlike other similar ventures, they aim to build and operate a clinician owned and run hospital providing state of the art health care. They are excited about its future and are confident it will not disrupt the life of residents in houses and flats in and around Moxon Street.

The hospital’s website – www.hadleywoodhospital.co.uk – says it will open in “the second half of 2014” and will serve the north London community.

“It will offer a wide range of medical services including general medicine, surgery, an urgent care centre, radiology, dermatology and oral and maxillofacial surgery. Cancer screening and treatment will be at the forefront of the planned services.

“It will provide an additional local resource for the community as well as cancer treatment for the wider north London area. The team will also provide specialist services for women’s and men’s health issues and will also treat children.”

Contractors refurbishing the building to be used by the hospital – at 52 Moxon Street – appear to have almost completed their work, which includes two operating theatres and a dental suite.

A notice posted outside by Barnet Council says a planning application has been submitted to add an extension to the first floor and also add two extra floors.  Aligning the two levels of the existing premises would create space for “services and special machinery for theatres in a sterile environment”.

Any comments or objections to the planning application have to be returned to Barnet Council by 26 June.

Local residents told the Barnet Society they were alarmed by the proposal to add two additional floors as the new hospital would then be as high as a block of flats at the rear.

Moxon Street is a cul-de-sac and because of on-street parking is often reduced to single-lane traffic.

“We are very concerned about the impact of a new hospital operating 24/7.  Can Moxon Street cope with all the medical and family traffic that will be generated? There is some parking on the site but will other cars have to use the Moxon Street car park? We hope the planners will take our concerns into account.”

In response to questions from the Barnet Society, Mr Shakib said that he and Dr Stevens had together “spent all our life savings to get the project this far”.

The planning application for the extension was submitted before the hospital opened its doors because during construction work it became increasingly apparent that extra space was needed to provide the highest level of care and to meet national guidance on the set up of a clinical facility and the necessary treatment rooms.

“The building is set among industrial units; a shower manufacturing company, vehicle service centre and builders merchant are its immediate neighbours.

“The planning application was put in with the understanding and belief that the proposed changes would mean the height of the hospital remained in keeping with its neighbouring buildings.

“The residents should be assured that the proposed extension will not necessarily lead to more patients travelling to the hospital but those that do come will be able to receive treatment in a more spacious environment.”

Dr Stevens is the skin cancer lead and chair at Barnet and Chase Farm Trust, Barnet Hospital, where he has been a consultant dermatologist since 1998, and Mr Shakib covers all aspects of diseases affecting the mouth, jaws, face and neck.

More in this category: « Swiss chalet cladding off but saga goes on Building on the fringe »