Threat to our green landscape 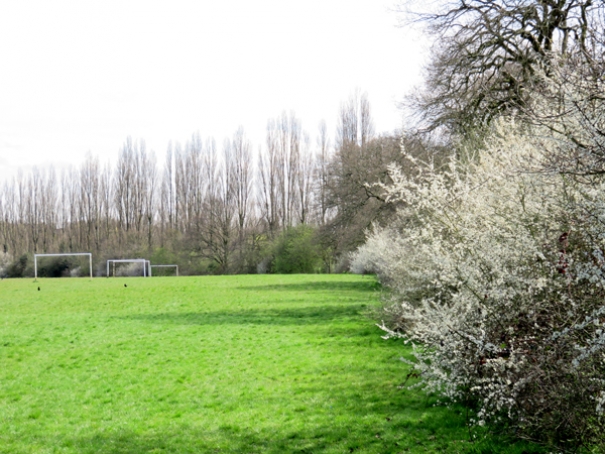 King George V Playing Field – the Council believe, a 'low quality, low value' link in the Dollis Brook green chain
A lot of new housing is coming to Barnet over the next few years. In the Council’s Housing Strategy 2015-25, it expected to be able to build 20,000 homes. But the latest forecast is that some 30,000 will be needed, so more sites must be found.

The Barnet Society will do what it can to ensure they’re well designed and landscaped, but it’s unlikely we’ll be able to avoid some loss of open space.

At present, Government, our Council and leading London Mayoral candidates have all pledged to protect the Green Belt.

But that hasn’t prevented Old Stationers Field (near Dollis Brook) being turned into a floodlit and fenced-off artificial pitch – and more may be needed when the proposed Ark Academy opens in 2018.

Moreover, much of Chipping Barnet’s green space, for example the Whalebones estate, is not actually designated Green Belt.

The impression of continuous greenery we enjoy is due to the happy accident of various fields, parks and trees combining to produce an effect greater than the sum of their parts.

For this reason, we welcomed the recent consultation on a Borough-wide strategy for the maintenance and enhancement of Barnet’s parks and open spaces over the next ten years.

The Council is commendably frank about needing to save £1.7m from its parks and open spaces budget between 2015 & 2020. But the report’s methodology was flawed and its suggested solutions cause us considerable concern.

Central to the Strategy is the ranking of every park and open space according to its high or low quality and value.

It’s a logical approach, but produces some bizarre results. In our immediate area, spaces deemed ‘low quality, low value’ include:

It can’t be right – to take one example – to classify Hadley Wood as low in both quality and value. It’s a remarkable enclave of ancient and mainly indigenous woodland (the former Enfield Chase) miraculously preserved within London, and unique in Barnet.

The action proposed for spaces categorised as ‘low quality, low value’ is, ‘Enhance quality and value or consider delivering outcomes through an alternative use’ (my italics).

Since funds are unlikely to be found for the former, the alternative use is most likely to be housing.

We don’t know which open spaces will be targeted, because Area Action Plans are still being prepared for Council approval in May – but no public consultation is currently proposed on the Plans, despite those proposals being what will matter to residents.

Development of most of these sites would be totally unacceptable. For any such idea, the Society would require a convincing demonstration of the housing, educational or other need, and a thorough appraisal of alternative options, costs and benefits.

Resulting architectural and landscape schemes would have to be to the highest design and environmental standards, with adequate compensatory planting, amenity space and provision for wildlife.

In our view, successful new development will only be achieved if the community is involved from the start, and shares both the vision and the shaping of projects.

Barnet Council’s record in this respect gives us no grounds for optimism, whether on a small scale such as Brookdene Nature Reserve in Finchley – fortunately no longer to be sold to a developer – or large scale such as West Hendon, where the impact of the new towers on residents and landscape will be massive.