Swiss chalet cladding off but saga goes on 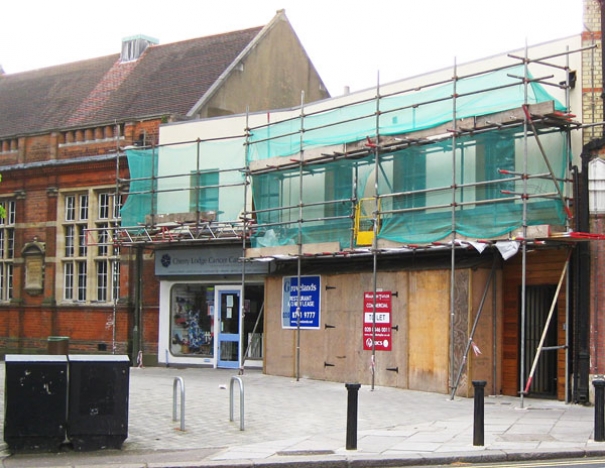 Covered with yet another facade
Barnet Council has promised that a heritage officer will carry out an inspection in Church Passage in the “very near future” in an attempt to resolve continuing disagreement over cladding on the frontage of retail premises in the heart of the High Barnet conservation area.

Unauthorised cedar cladding installed on the front of 1 Church Passage has been removed but a replacement frontage has provoked further controversy.

Local groups have accused the council of failing to uphold an enforcement notice that was backed by a planning inspector and which required the owner to restore the original surface of rough pebble-dashing.

The three-month period allowed by the planning inspector Wendy McKay for the restoration of the frontage expired on April 14, and continuing uncertainty has led to complaints from local groups keen to protect the appearance of the conservation area around the parish church of St John the Baptist.

Iain Sutherland, Barnet Council’s principal planning enforcement officer, says that he is awaiting the advice of a heritage officer who will inspect the replacement frontage.

In the meantime Mr Sutherland is prepared to consider further representations before making a recommendation on possible action.  He has already received several comments and is anxious to know “what the exact areas of concern are and why these cause concern”.

Gail Laser, vice chair of Barnet Society and the Chipping Barnet Town Team, has written to Mr Sutherland to complain about the delay in implementing the planning inspector’s decision to support the council’s original enforcement notice.

“Local conservation and heritage groups want to know when this unsightly frontage is going to removed and replaced so that the gateway to Barnet town centre can be restored and regain its lost and original charm.”

Michael Kentish, treasurer of Barnet Businesses and Traders Association, told the Barnet Society that the new facade which replaces the previous cedar cladding has been installed in front of the original Victorian rendering, and the rough pebble dashing has not been restored in accordance with the ruling of the planning inspector.

“If changes are going to be made within a conservation area they must enhance a building’s appearance.  To honour the planning inspector’s decision there should be rendering on the original brickwork which has still not been exposed but is instead covered up with yet another facade.”

Earlier this year the planning inspector’s ruling was welcomed by the Barnet Society and other groups which had lodged formal objections to what local residents said looked like a “Swiss chalet”.

In her four-page decision letter (14.1.2014) Ms McKay said the unauthorised installation of varnished cedar cladding to the upper floor and part of the ground floor of 1 Church Passage was insensitive and represented “an incongruous and dominating feature in the street scene”.

She ordered that the timber cladding must be removed within three months and replaced with the original surface of rough pebble-dashing.

More in this category: « Green belt “critical to the health” of Barnet New private hospital for High Barnet »