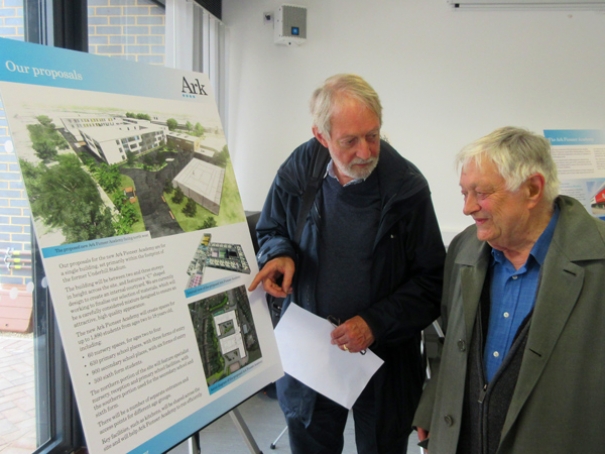 A response to plans for the Ark Academy School will be prepared by Robin Bishop (left), who leads the Barnet Society’s planning and environment team, and Peter Bradburn, who advises on transport issues
The Ark Academy network says it intends to work with planners at Barnet Council to try to meet local anxieties over proposals for a super-size, £31 million new school to be built on the site of Underhill, the former stadium of Barnet Football Club.

Nearby residents have concerns about the impact on other local schools and increased traffic congestion in Barnet Lane, Mays Lane, and at Underhill’s junction with the bottom of Barnet hill.

If a planning application to be submitted in June gets council approval, the football stadium and its floodlights would be demolished in November, ready for construction work to start on the new school early in 2017, for completion by September 2018.

Ark Pioneer Academy would cater for children from the age of two through to 19, from nursery to sixth form, and have 1,890 places when it reaches full capacity in September 2024.

It would serve a catchment area within a radius of just under two miles for primary school children and three miles for secondary pupils.

Measures proposed to minimise traffic congestion would include staggered start and finish times for different ages, with perhaps secondary pupils arriving earlier than primary-aged children, and off-site pick-up and drop-off points, with routes for children to walk to the school entrances.

Despite Ark’s reassurance that it would implement a plan to smooth the flow of traffic, the Barnet Society’s transport adviser Peter Bradburn says he remains concerned that the Underhill-Barnet hill junction would become an even greater bottle neck.

“Another challenge is the need to create a really a safe crossing on Barnet Hill for children travelling by underground or bus, a problem made even worse by the lack of a pavement on the tube line side of Barnet hill.”

“This will be a non-selective, non-denomination school and accept pupils from within the radius advised by Barnet Council.

“Children living outside the Barnet borough boundary, but within the limits of three miles, or just under two miles – for example in Hertsmere or the London Borough of Enfield – might also be eligible, and depending on take-up, children might come from further outside the radius.”

Ms Duncan said that the London Borough of Barnet needed new school places, at every level, from reception to sixth form. By 2025, there would need to be 2,700 additional primary places, and 5,000 secondary places.

Underhill had been chosen after an extensive search and was considered “well suited” as the site for a new school. Its construction would help free up additional places at other local schools.

Once planning permission has been obtained, Ark will advertise for a founding principal for the new school.

Construction costs are to be paid for by the government’s Education Funding Agency. Bowmer and Kirkland, a major family-owned construction company, has been awarded the contact.

Construction vehicles will use both entrances to the site from Barnet Lane and where possible seek to avoid the use of Westcombe Drive.

As part of the planning process, Ark says it will submit a traffic management plan and any conditions imposed to ease congestion would be paid for by the EFA.