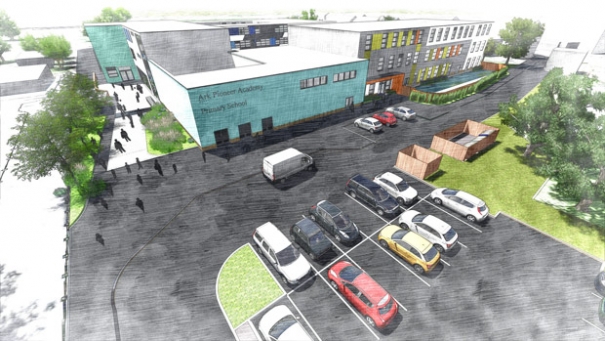 Proposed south facing car park of the Ark Pioneer Academy school
Planners and consultants representing the proposed Ark Pioneer Academy to be built on the site of the former Barnet Football Club stadium at Underhill, insist that a new school for almost 2,000 pupils is needed for the northern part of the Borough of Barnet.

At present many children from the Barnet area opt for schools in Hertfordshire, and the aim of the Academy is meet this demand, and the future forecast growth in the number school-age children. 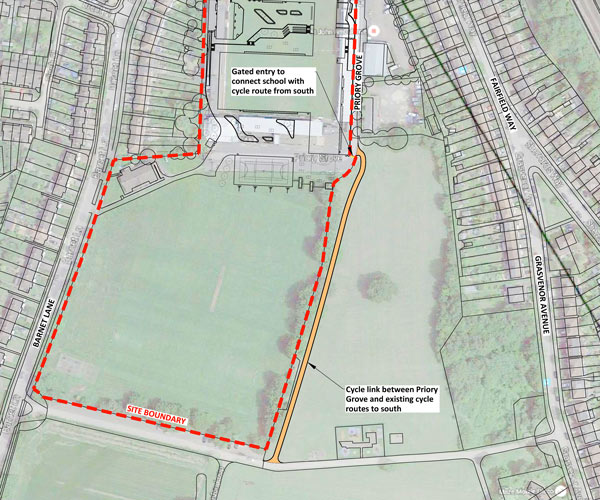 Newly-published artists’ impressions reveal that three story building would have an inner courtyard, and that the main car park would be at the southern end of the site, facing the playing fields beside Barnet Lane.

To reduce congestion, the school will have four separate entrances for pupils, and Ark Pioneer hopes to negotiate for the use of car parking space behind the Everyman cinema to provide a dropping off place for primary aged-children, who would then be accompanied to walk to and from the school.

When Ark Pioneer planners, architects and consultants met a delegation from the Barnet Society (15.6.2016), the Academy team insisted that the new school was needed despite the fact that some local parents had declined to send their children to the nearby Totteridge Academy.

Bob Robinson, of planning consultants DPP, accepted that some local families opted to send their children to schools in Hertfordshire, rather than to Totteridge Academy.

“But the fact that they are exercising their parental choice, does not alter the fact that the borough council says the projected future demand shows that there is a requirement for more school places in this part of the borough, and that is why the Ark Pioneer Academy, which will eventually have 1,890 places for pupils is needed.”

Charlie Fagan, project manager for Ark, said the school hoped to reach an agreement with Everyman cinema for the use of some of its car park space as a drop off point for primary pupils. “The children would then be accompanied on a walk to school with a lollipop lady to steer them across Fairfield Way.” 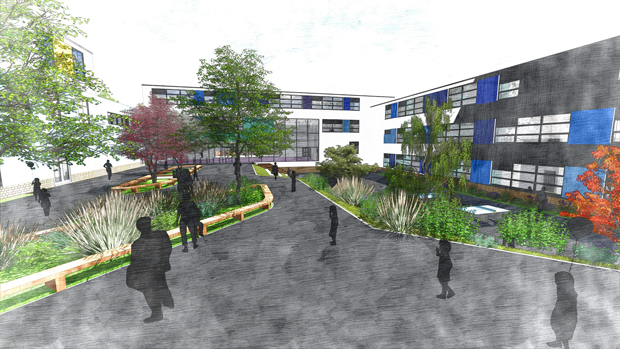 There would be four main entrances for the 1,200 secondary pupils, including access from the car parking area just to the south of the former Barnet Cricket Club playing field.

Peter Brown, of architects Pick Everard, described the lay-out of the school:

There would be a primary block, with two nursery classrooms, and its own primary playground.

The former cricket club playing field, which would be leased from Barnet Council, would become the school playing field, and it and other facilities such as sports halls, music rooms and drama studio, would be available for potential community use.

There would be ample pedestrian footpaths and also an entrance for pupils riding to school, via the existing cycle track across the playing fields.