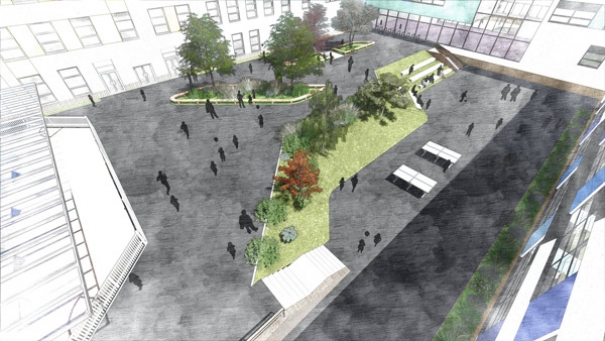 View of Ark courtyard - the only playground currently proposed for 600 primary pupils
While we welcome educational use of the site, particularly if coupled with community access to the Academy’s indoor and outdoor sports and other facilities, the current proposal for 1,890 pupils plus 150 or so staff would be an over development.

Its size and design should be reconsidered before a planning application is made later this summer.

We acknowledge efforts to mitigate this through negotiations with the Council, TfL and the Everyman cinema, and would welcome a new cycle path from the south.

However, we have considerable doubt whether these would suffice given present traffic congestion at peak times – which will only get worse as planned housing developments are completed in the locality.

Nursery children are even worse off: DfE & CABE guidance recommends at least 500m2 for 60 pupils; the present plan provides about a third of that.

Such a drastic reduction would be unworkable.

The proposed staggering of pupil play times would impact on teaching and learning in classes overlooking the play court, even if the classrooms were mechanically ventilated.

Ball games in the courtyard would be especially disruptive (and potentially damaging).

At the very least, a 3-form entry primary school would require a multi-use games court for PE and recreation.

Providing just one for the whole Academy means that KS2, 3 & 4 pupils would be lucky to have one timetabled session per week – inadequate for a balanced curriculum, let alone a healthy lifestyle.

To sum up, the combined effect of such tight planning, both inside and out – coupled with the difficulty of managing pedestrian and vehicle movement around the site – would stress both Academy and neighbourhood unacceptably, and jeopardise the success and reputation of Ark Pioneer Academy.

A scaled-down proposal could be acceptable, however, and we would be happy to discuss this further if you wish.