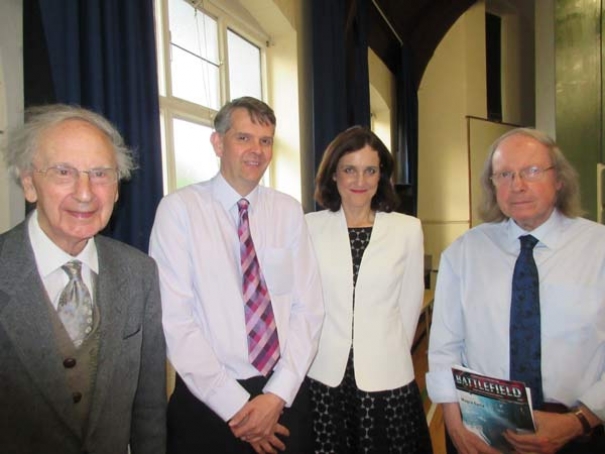 Barnet Society’s President Aubrey Rose (left) welcomes Simon Marsh, research officer of the Battlefields Trust, Theresa Villiers, MP, and Howard Simmons, also of the Trust, who is advising Barnet Museum
When work starts in October on a survey and excavation to find the site of the Battle of Barnet of 1471, local residents and schoolchildren will have their chance to play a part in the great upsurge in interest in medieval history that has occurred since the discovery of King Richard III’s remains in a Leicester car park.

Little is known about Barnet’s precise role in one of the grisliest battles of the Wars of the Roses, and the thought that at last there might be some answers was a great inspiration to members of the Barnet Society after a presentation by the Battlefields Trust.

The two-year project to determine the precise site of the battlefield is to concentrate initially on Wrotham Park and surrounding farm-land, and will be conducted by Sam Wilson, a military archaeologist from Huddersfield University.

Mr Wilson will be outlining his plans at Barnet Museum’s annual tea in the park afternoon on Sunday 28 June (Courthouse Gardens, 1.30 – 5.30 p.m.). With him will be members of a medieval military re-enactment group who will be in the clothing and armour of the period and will be armed with bows and guns.

The Battle of Barnet was one of the key confrontations of the Wars of Roses and saw the death of Warwick the ‘Kingmaker’, which explains why the battlefield has such high historical and archaeological significance.

Simon Marsh, research officer for the Battlefields Trust, was guest speaker at the Barnet Society’s annual meeting (18.6.2015). He explained that historians often disagreed about the precise site of a medieval battlefield and Barnet was no exception.

The very latest research indicated that the earliest maps and accounts were probably correct in placing the battlefield in what is now Wrotham Park, between the old road to St Albans at Kitts End and the old road to Hatfield, now the Great North Road.

In the 1800s historians thought that the battle took place around Hadley Green, to the south of the obelisk at Hadley Highstone, but Mr Marsh said this was disputed by later accounts of the battle which only came to light in the 1960s.

He described how detailed survey work, mapping and excavations had determined that the site of the Battle of Bosworth was further south than originally thought. The same techniques would be applied in Barnet: the site would be divided up and then searched methodically with metal detectors in the hope of finding artefacts.

Land in and around Wrotham Park has not been systematically searched before, and Mr Marsh said the team would be looking for round iron or lead shot from cannon, and smaller lead shot, because Barnet was one of the earliest battlefields where handguns were used.

“Field-work starts in October, and as this is a two-year project we do expect during that time to find the site. Barnet should be easier than the survey work and excavations at Bosworth because we think the battlefield is in a more confined space and that should help the archaeologists.

“Our aim at the Battlefields Trust is to do all we can to encourage Barnet Museum to secure the widest possible community involvement. This is a tremendous opportunity to get local people and school-children involved in the history of their town.”