The bustle of Barnet 120 years ago 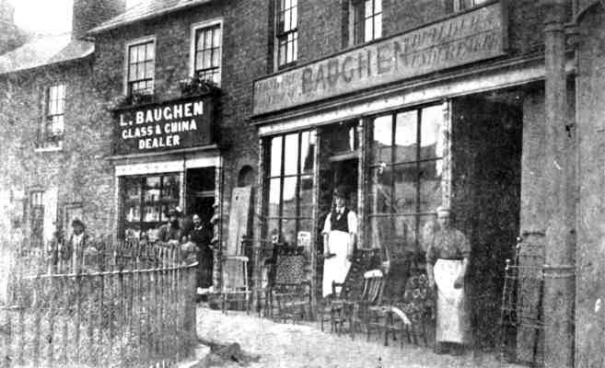 Church Passage before the library was built
A unique, almost-forgotten tape recording gives a fascinating eye-witness account of every-day life in Barnet at the turn of the century before last, when horse-drawn coaches, traps and wagons filled the High Street, long before the arrival of the motor car.

Bert Plummer and his sister Kate, who grew up in Church Passage in the mid-1890s, describe in great detail the shops and business that lined the High Street all the way from what is now High Barnet tube station to Hadley Green.

Their hour-long conversation, recorded in 1977, is filled with reminisces of escapades and descriptions of tradesmen and workers whose livelihoods revolved around what in their childhood was a busy coaching and market town. 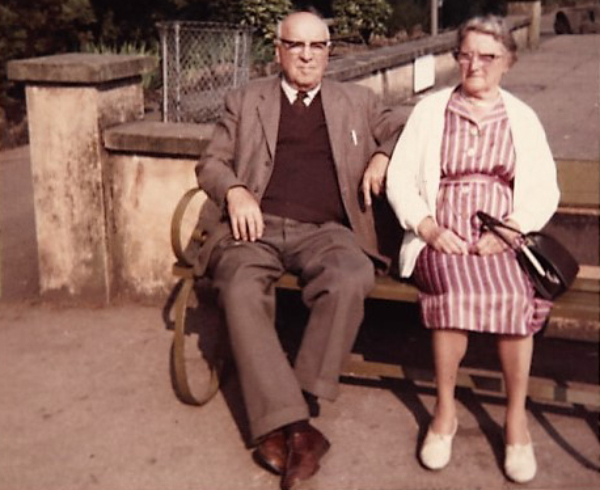 They both went to Moxon Street School, and as they grew up they watched and listened to all that went on around them: cattle and pigs being slaughtered and butchered; the saw mill in Tapster Street where trunks were turned into planks; and the numerous craftsmen whose premises lined the High Street.

The Pummers’ cast list of characters could hardly have been bettered by Charles Dickens himself: an alcoholic bell ringer at Barnet Market; a German baker who gave free doughnuts to children from Moxon Street School; a tinker in Church Passage who soldered patches onto tin kettles and bowls; and a vet who put strychnine on to the tongues of the stray dogs rounded up by the police.

The original tape recording, now transferred to a compact disc with the help of Alan King of Barnet Hospital Radio, is a much cherished memento of Bert’s grandson, John Hay, of Hillary Rise, off the Meadway.

Bert, who died in 1979 at the age of 88, leads the conversation assisted by his late sister Kate and daughter Joan. He was born in Long Lane, Finchley in 1890; his father was a horseman at Bramley Farm, Cat Hill; and to begin with they lived in a cottage opposite the Cat public house. 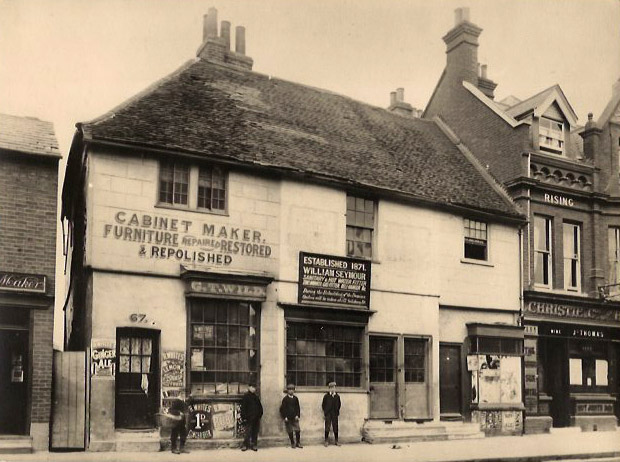 When aged two, Bert’s parents opened a grocery and sweet shop in Church Passage where he and Kate spent their childhood.

In what is a classic piece of oral history, Bert and Kate start their vivid audio tour at the station, leading the listener up the High Street, past the fields that now form the Meadway, heading towards the Red Lion, at the junction with what is now Fitzjohn Avenue, but back in the 1890s was also fields.

The Plummers are able to recall the names of almost all of the many public houses and shops that made Barnet such an attractive stopping off point for travellers setting off for the north, or heading into London.

First point of interest is the former Barnet Cottage Hospital, followed by solicitor’s office and then the conservatory of a large house that is now the site of Queen Elizabeth’s Girls’ School.
Stray dogs grisly demise

When standing in the yard of the Woolpack public house, opposite the Police station, Bert was fascinated by the grisly fate of stray dogs in the police pound. “I used to watch the Police poisoning the stray dogs. They’d all be lined up, and a vet went along the line putting strychnine on their tongues, and they all just dropped dead.” 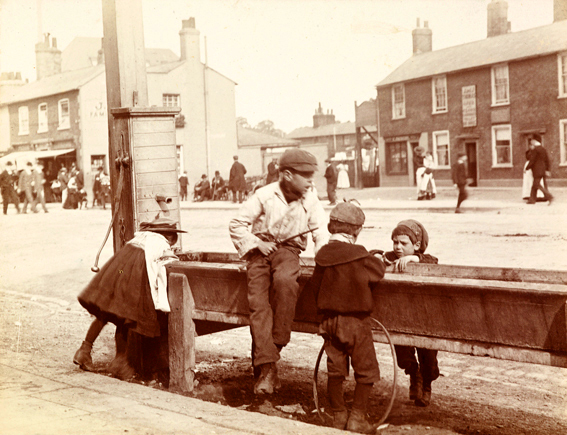 Further up the High Street was a coal office, and a notice that said Edison Bell telephone. “That was the only place in Barnet that you could telephone from.”

After recalling the shops and businesses either side of the Mitre and Bull public houses, Kate remembers a German baker at the corner with Tapster Street.

“He was a huge man, a very nice man, and we used to stand at the bake house door on doughnut making day. He used to give one each to the kids from Moxon Street School, and they were such great, big juicy doughnuts.”

At this point, Bert chips in with his memory of the German baker. “If you went to his shop early in the morning, there was a line of kids with pillow cases waiting to buy up the previous day’s bread...yesterday’s stale loaves were sold cheaply.”

Further along the High Street, towards the Moxon Street junction, was the King’s Head. “We used to call it the glass house because the King’s Head was the first public house to use glasses instead of pewter pots.”

Kate recalled Nicholls’ piano shop next door. “Mum bought a piano off them.” Bert: “Our dad used to deliver pianos for them – he was an undertaker’s man as well – and he had a special narrow cart specially for carrying pianos.”

Patching up tin kettles, bowls and baths
The Plummers’ fondest memories are of Church Passage and Moxon Street which became their childhood playground. 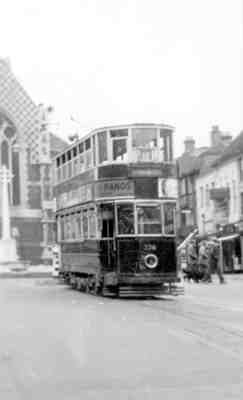 Next door to Stanfords’ brewery on what is now Church House, at the corner of Church Passage and High Street, was Ashby the tinker, whose front room was his workshop.

“Ashby the tinker used to put patches on tin kettles, bowls and baths. He would sit there in his front room – (“and his daughter became our aunt”, said Kate) – and all round him would be the zinc, spirits of salts to clean the metal, and then he would solder on the patches.”

Bert said that one night he was allowed to stay up late to see the mail coach arrive at the Post Office at the other end of Church Passage.

“The four-horse mail coach to Cambridge came up Barnet Hill at eleven o’clock, and as soon as the driver had dropped off his delivery, he picked up the mail and off they went.”

Another nearby shop was Clayton’s fish shop. “Clayton had two thumbs on one hand...Yes, he had three thumbs,” said Bert.

The Plummers lived in Church passage until they were “turned out when the library was built”. After going to Moxon Street School, Bert went to the National School and Kate became a pupil at Christ Church School.

“Moxon Street was my real playground,” said Bert. “On market day, they drove the cattle into Friday’s slaughter house where they did the slaughtering. We kid used to hang around for pigs’ bladders.

“Further down Moxon Street was Charles the coach builder. He used to make farm wagons as well. Then in Tapster Street was the old saw pit where tree trunks were cut up and turned into planks. There was always lots to see.”

As the Plummers progress up the High Street, they name shop after shop on either side of the road, from Union Street towards Salisbury Road, the junction with St Albans Road, and then Barnet Market. 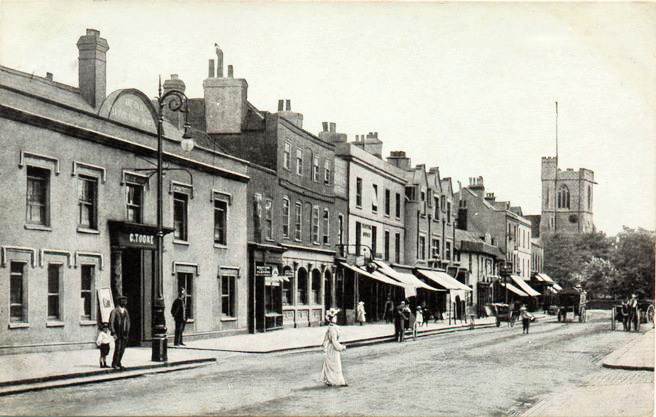 Mrs Davies was the milkmaid where “a pint of milk was a half penny if you took your own jug”; Cole’s hardware shop, next to the passage that led to Barnet Barracks (now the site of the Spires shopping centre); and then the YMCA, where boards in the hall were removed to reveal a small swimming bath. “It was for swimming lessons, and the only swimming baths that Barnet ever had.”

After Bennett’s cycle shop was the Wellington, which became the Green Dragon. “It used to be a lodging place for men who used to bring hay to London, a common lodging house, with a horse trough in front.”  Another nearby by pub was the King of Prussia, which changed its name to the King George.

Market day bell ringer jilted in marriage
Kate recounts the sad story of the bell ringer for Barnet Market who doubled up as the town crier. “He used to ring the bell on market day, but sadly he became an alcoholic.

“What happened was that he was engaged to be married, and he gave all his savings to his fiancé, to buy their home.

“He was a religious man and used to preach at the Baptist Church in New Barnet, but although the wedding was arranged, the girl backed off and went off with all the money.

“She was never found. He went out of his mind and became an alcoholic. He was knocking about for a good many years, and used to come into our shop and ask for a needle and cotton to sew on a button.

“Later on I remember a little girl was found murdered in a field in East Barnet, and as he used to lay out in the fields at night, he was arrested, but he didn’t do it, and someone else was charged.”

Other nearby shops prompt memories. Tony Watson’s basket shop: “He was a dwarf, and his wife was six-foot tall, and she went around in a cape and bonnet with their child, who was also a dwarf.”

They both recollect the old market square in Bath Place. “One morning General Booth of the Salvation Army, who was going off on a tour around the world, stood in the old square and gave a sermon.”

At this point in their conversation, Kate interrupts Bert, to remind him of the days when political meetings were held in the square. “Do you remember when you stood in the square and made a speech for the Liberals. I stood there and listened to you.”

Bert and Kate admit that while they can recall what happened in their childhood, that can’t remember what they did last week.

“Church Passage was such an interesting place to live, and we both have so many memories. I remember seeing the first motor car, with a man with a red flag in the High Street.

We were also one of the first towns to get electric street lights, and when the first tram came out to Barnet church, Barnet Hill was lined with people, all the way up from the Old Red Lion.”

Bert’s grandson, John Hay, said his grandfather started selling newspapers at Barnet Station after leaving school at the age of 11, and then delivered newspapers for W H Smith, becoming one of the company’s longest-serving employees. 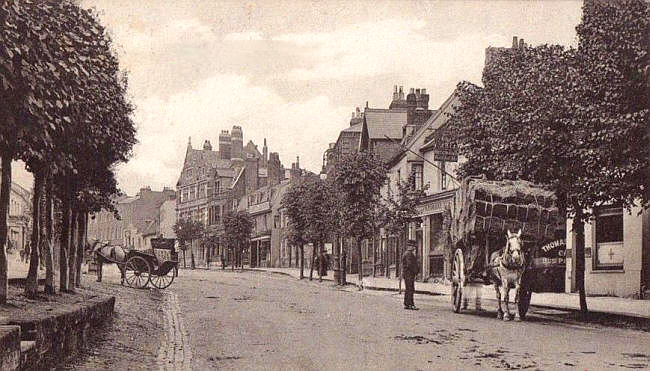 Eventually he was appointed manager of W H Smith at King’s Cross Station, which became the company’s biggest book shop. “Grandfather became Smiths’ highest paid manager because so many people travelling north and to Scotland, bought a book for the journey.

“The turnover at King’s Cross was the highest in the country, and lots of famous authors, such as Dennis Wheatley, gave him signed copies of their books.

When he retired at the age of 65, W H Smith gave him an award for his 54 years’ service, in recognition of the longest-serving employee they had ever had.”

Bert and his wife Lily spent their final years at their home in Summerford Grove, East Barnet.