Lottery win for Battle of Barnet 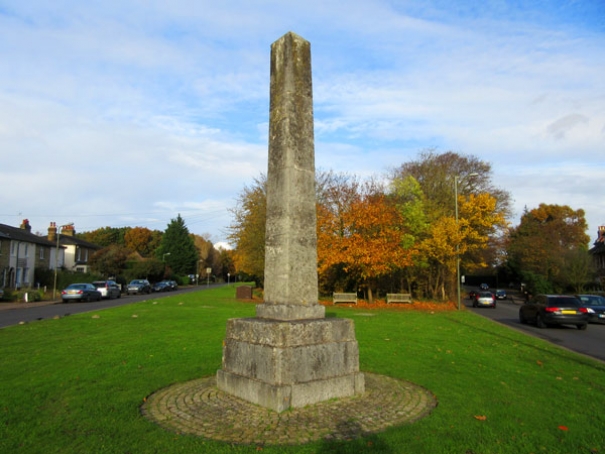 Hadley Highstone is the sole local reminder of the Battle of Barnet
A grant of almost £100,000 has been awarded by the Heritage Lottery Fund towards the cost of promoting and celebrating the 1471 Battle of Barnet.

Local historians say the award is well-earned recognition after years of campaigning for financial help towards fulfilling a long-held desire to unravel the mysteries of one of the fiercest battles of Wars of the Roses.

Little is known about the exact site of the clash between the armies of York and Lancaster that took place in the countryside just north of Barnet, not far from Hadley Green.

Lottery funding will now give historians and enthusiasts the chance to reveal and exhibit much more about what without doubt was the most violent and deadly day in Barnet’s long history.

Three Kings of England were in Barnet that day – Edward IV and Henry VI, who had both been crowned during the Wars of the Roses, and the future Richard III.

The Battle of Barnet Project, led by Barnet Museum, now has the necessary finance to create a new exhibition space, prepare leaflets for a heritage trail, train battlefield tour guides, arrange two annual medieval festivals, and lend local schools replica items from the period. One key appointment will be to hire a project co-ordinator.

A team of military archaeologists, under the supervision of Huddersfield University, has already spent well over a year with metal detectors searching the most likely locations, and their most promising finds are now being cleaned, assessed and dated.

This is the only Historic England registered battlefield in London and it’s fantastic that National Lottery players’ support is helping people of all ages get a sense of their valuable local heritage, creating a real legacy for Barnet.

After a previous unsuccessful bid to obtain funding, the Heritage Lottery Fund has now awarded a grant of up to £98,600, which represents 82 per cent of the £129,100 eligible cost of the project.

As one of the long-term supporters of Barnet Museum and its campaign to secure lottery funding, the Barnet Society believes the grant is final recognition of the struggle there has been by local historians and community activists to celebrate Barnet’s place in the Wars of the Roses.

Other well-known medieval battlefields from the same period of the 15th century such as Bosworth Field, Tewkesbury and Towton have been well-researched and documented, but Battle of Barnet enthusiasts have always been a poor relation when trying to tell their story, and Barnet has missed out on the great revival of interest in the Wars of the Roses following the discovery of Richard III’s remains buried under a Leicester car park.

Except for the Hadley Highstone obelisk, erected in 1740 to commemorate those who died in the battle, Barnet has had nothing to offer the visitor; even English Heritage has been unable to determine the precise site of the battlefield.

Now at last Barnet -- where those fighting on 14 April 1471 included the 17-year old future King Richard III, and the Earl of Warwick, known as the Kingmaker -- will be able to celebrate its medieval heritage in a style that befits such a decisive conflict, and museum volunteers will be able to point visitors to what after all is the most important battlefield site within Greater London.

In announcing the grant, Stuart Hobley, head the Heritage Lottery Fund London, said the fund was really excited by the chance to support the Battle of Barnet Project and its plans to bring “this remarkable period of our royal and medieval history to life”.

"This is the only Historic England registered battlefield in London and it’s fantastic that National Lottery players’ support is helping people of all ages get a sense of their valuable local heritage, creating a real legacy for Barnet."