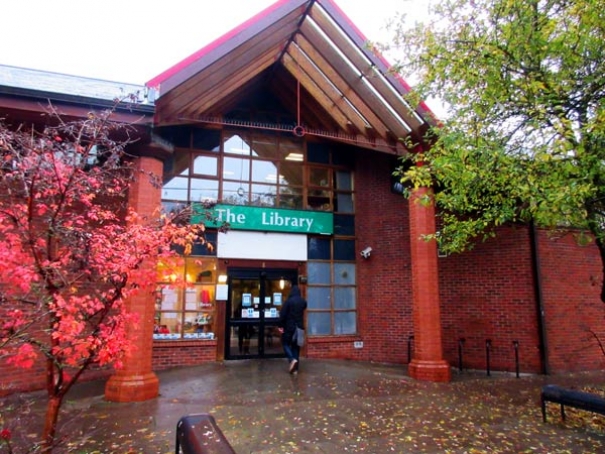 Chipping Barnet Library
Barnet Council is being urged by the Barnet Society to postpone the two-month temporary closure of Chipping Barnet Library planned to take effect as from Monday 5 December in order to allow time for further consultation on the building alterations and redundancies that have been proposed.

The library is due to re-open in the week commencing Monday 6 February 2017.

As from next April, when self-service operation is introduced, the building will be unstaffed for much of the day.

The Society considers the time allowed by Barnet Council for consultation was grossly inadequate, and it is appealing to the council to hold another public meeting to explain its plans and to allow a longer period for comments.

Notices explaining the local arrangements and timing for self-service opening appeared on 29 October, with 4 November the cut-off date for comments before the council applied for planning permission for rebuilding and refurbishment work.

Only now has the local community begun to comprehend the full impact of leaving such a large, well-used building unstaffed for such lengthy periods, with the possibility of there being only volunteers in attendance on Mondays and Thursdays.

A public information session about the changes at Chipping Barnet was held on 26 October, but that was before there had been either a detailed explanation or full understanding of the implications of the changes that will follow the library’s re-designation as one of the borough’s six “core plus libraries”.

“Core plus libraries” will have the greatest number of staffed hours; offer an “extensive range of items for loan”; provide study pace; create a community space for hire; and offer “a wide range of reading and literary events for all”.

Our examination of the details announced so far raises so many issues, we think that until they are properly answered the closure should be delayed. 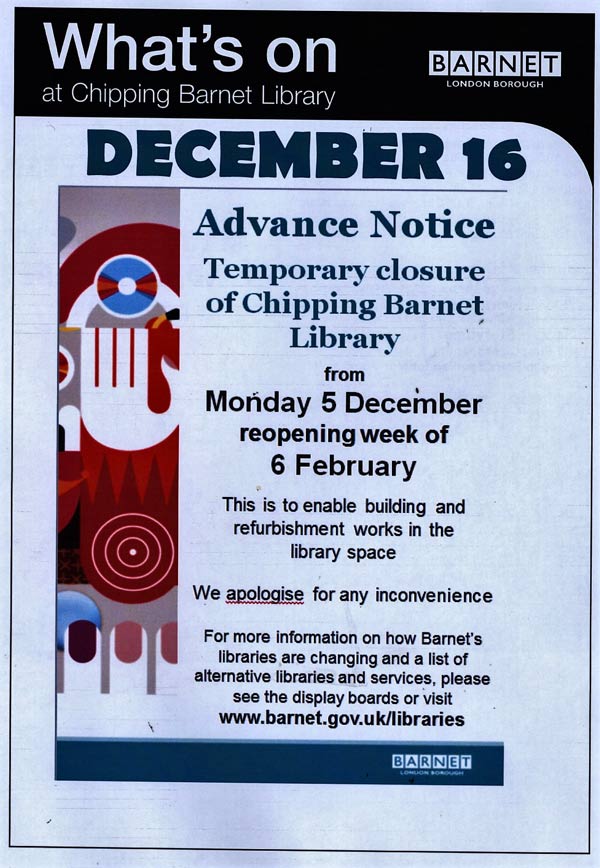 Although there is already closed circuit television in operation in the library complex there is a lack of a reassurance about the level of safety cover when the library is unstaffed.

One specific illustration of the dire lack of consultation – and an inadequate understanding of what was afoot – was the treatment of parents with children attending sessions in the library activity room for non-walking babies and toddlers.

They were informed by email on 15 November that the final sessions will be held on Tuesday 29 November and that this facility – which costs £4.95 per child – will no longer be available at Chipping Barnet.

At its last committee meeting (17.11.2016), the Barnet Society decided to do all it could to monitor the repercussions of the council’s plans for the Chipping Barnet library – part of a borough-wide re-organisation.

Unless the council is prepared to re-open the consultation process, and if it goes ahead with the closure plans, one option might be to ask residents to stage of protest read-in outside the library on 5 December to demonstrate the strength of local feelings.

During the two-month closure of the library – from 5 December to 6 February – there will be “general refurbishment of the library space”; the layout of shelving and location of PCs will be altered; a small community room will be provided on the ground floor; and the Hyde room will be converted into “letable space”.

Additional refurbishment work will be carried out between June and August next year.

The council says that from 1 April the number of staffed opening hours will be reduced.

Once self-serving has been implemented, eligible library card holders will be able to use the library during unstaffed opening hours seven days a week:

Monday: unstaffed from 7am to 10pm (with three volunteer supported self-service opening hours)

Thursday: unstaffed from 7am to 10pm (with three volunteer supported self-service opening hours).

During self-service hours, library users will be able to:

Barnet Council says the redundancies – cutting permanent staff from 114 to 62 – and the introduction of self-service opening will contribute £2.2 million towards reducing the budget gap the council needs to find of £61.5 million between now and 2020.

It says the scope of the new library service was agreed in 2016 following “a detailed review of options and extensive consultation with residents”.