TfL Bus Changes: Turn these plans round at the next stop! 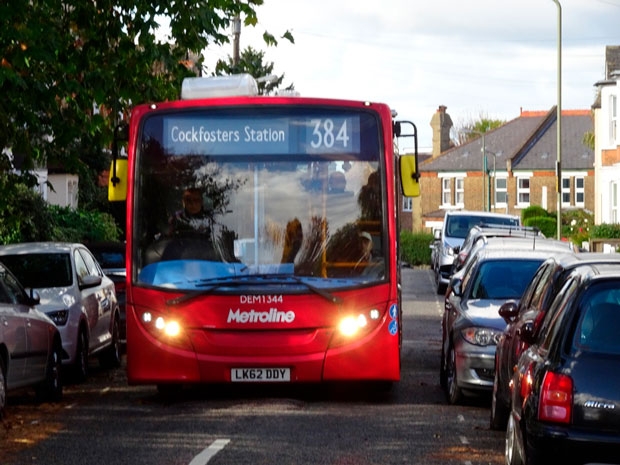 384 bus negotiating Strafford Road, High Barnet. TfL would switch it to Salisbury Road.
After carefully weighing members’ and readers’ – often differing – points of view on the changes proposed by Transport for London (TfL) to the 292, 384 & 606 bus routes and a bus stop on Barnet Hill, the Barnet Society has concluded that for the moment we support the present arrangements. With radical developments on the horizon in New Barnet & High Barnet, however, they should be kept under review.

Committee member Andrew Hutchings (who has a transport qualification), Peter Bradburn (a former transport consultant) and I (a passenger) have been studying TfL’s proposals. On 3rd October we posted a summary with some initial thoughts on this website, and invited your comments.  Nineteen of you responded, and all your points have been considered.

Below is the full text we have submitted to TfL on behalf of the Barnet Society. It also includes our comment about reductions on bus routes in Inner & Central London, which we generally support – especially if some of the savings benefit Barnet.

If you disagree – or agree – you can still submit your personal comments direct to TfL up till 9th November on https://consultations.tfl.gov.uk/buses/route-384/

In principle, we support extending the existing route to Edgware. As we pointed out in 2013 to the Transport Committee of the London Assembly and in 2017 to the Mayor of London, Chipping Barnet’s bus connections do need improvement to the east, west and north. But we also value the reliability and inclusivity of the present Cockfosters-Quinta Drive route.

Ideally we would prefer both to keep the existing 384 route and to extend it. We recognise that TfL is likely to require a cost-neutral solution, however, and that running the 384 via Apex Corner would impair its reliability at congested times.

At present the advantages of a direct Edgware extension seem limited chiefly to:

These gains are relatively unproven compared with the clear detriment of the proposed change to existing users – particularly the less mobile, elderly and carless people with children and/or shopping in East, New and High Barnet.

We are left wondering if an important TfL consideration is to compete with Unō’s  614 route between Barnet, Edgware and Queensbury at minimal additional cost.

Our conclusion is that, unless ridership statistics can be produced to demonstrate otherwise, the 384 service should be retained in its present form, with only minimal changes. 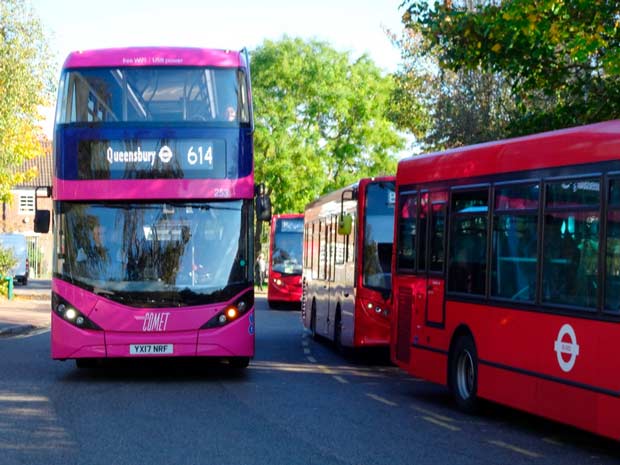 384’s competitor: Unō’s 614 bus between The Spires, Edgware and Queensbury

New Barnet residents have fought for years to retain its existing town centre shopping and other facilities. These include:

Direct service to all of these would be lost if TfL’s proposal goes ahead.

We are also concerned about the proposal to re-route the 384 along Victoria Road. Over several stretches the pavements are narrow and give scant protection to pedestrians. Peak-time congestion frequently occurs at the crucial Park Road/ Victoria Road junction.

This will be exacerbated when the Victoria Quarter housing (under construction) is complete. That will add some 350 new homes – i.e. at least 1,000 new residents – a proportion of whom would use the 384. Large office blocks around New Barnet Station are also being converted into flats. Furthermore, the Mayor of London’s encouragement of high-density homes over and around New Barnet Station could bring many more before long.

It would be ironic if the 384 were to cease to serve most of New Barnet’s key facilities just as its population is due to expand significantly.

We are unconvinced of the merits of moving the route from Strafford Road to Salisbury Road. The small advantage of speeding up the buses would be offset by considerable detriment to residents of the streets to the north and west, and by the greater risk of congestion and delay in Salisbury Road.

We support retention of existing Hail & Ride sections, though we acknowledge that in places its usefulness is reduced by parked vehicles, and that more fixed stops may be a solution.

We oppose the proposed cut to this service. The stretch between Chipping Barnet town centre and The Totteridge Academy already risks overcrowding if one third of the service is cut, especially in the morning, and this will be exacerbated when the Ark Pioneer Academy opens in September 2019.

We are pleased that TfL plan to keep the changing pupil, parent and staff needs under review.

On balance we oppose moving the existing stop. We recognise the advantages of doing so to some tube travellers, but it would create new difficulties for traffic near the pedestrian crossing unless a new lay-by were to be built. But the latter would require removing several trees in the middle of the splendid line that was planted 20 years ago – as a direct result of a Society campaign – and which we would therefore oppose.

A simpler way to improve tube/bus interchange would be to upgrade the present narrow and dilapidated pavement between High Barnet Station’s south entrance and Barnet Hill.

We are also concerned about the future of the bus stop further down the hill near the Underhill turning. This busy stop is already threatened by the Council’s proposed widening of the A1000/Underhill/Fairfield Way junction to mitigate present peak-time congestion (which will worsen as Ark Academy expands).

In the longer term, high-density housing development may be proposed for the TfL-owned car park and adjoining land on the station side of Barnet Hill. This would be an excellent chance both to improve access to the station radically and to rationalise its bus connections.

We do not support the recent increase of TfL’s target distance from a bus route from 400 to 450 metres. Not only does Chipping Barnet already contain one of London’s highest proportions of elderly people – and therefore probably disabled or with impaired mobility – but it is unusually hilly.

We generally support TfL’s proposed changes to 33 bus routes in Inner & Central London to help make the bus network simpler and more efficient and ensure that TfL’s resources are invested in the right locations.

Since the net effect would be a reduction of services in Inner & Central London, the Society’s main concern is that Outer London – which is more dependent on buses, and where considerable development is expected over coming years –  should benefit from at least some of the resulting savings.

More in this category: « Plea to save historic plaque Looking for answers - The Great War casualties »