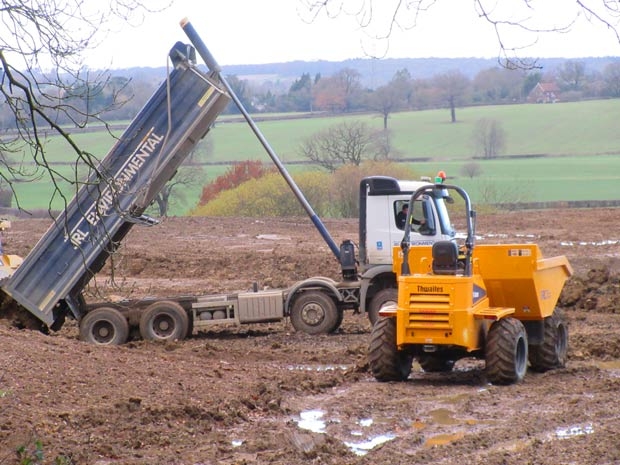 Diggers at work at the Old Ford Manor Golf Club, but are planning conditions being observed?
Earthworks remodelling Barnet golf course For some weeks past a constant stream of tipper lorries has been unloading top-soil and sub-soil at the northern end of the Old Fold Manor Golf Club, Hadley Green, where extensive landscaping of the golf course is about to start.

Improvements include the creation of a driving range with six covered range bays, a short game academy course and a raised safety bund – or mound – of between one and four metres in height that will run alongside the club’s boundary with the St Albans Road.

There was considerable controversy before the scheme was finally approved in August 2017 because the club is within the designated battlefield site of the 1471 Battle of Barnet, and the 2.5 hectares course includes wetland habitat with great crested newts and grass snakes said to be among the amphibians and reptiles present or close to the development zone.

Entry to the site from St Albans Road is by way of a temporary access road that has been opened across farmland on the Barnet site of the Green Dragon public house. Initially it was said up to 8,000 loads of landfill would be needed and strict conditions on both lorry delivery and excavation work were imposed by Barnet Council and Hertsmere Borough Council when they granted planning permission:

After representations made on the Barnet Society’s behalf by David Lee, the developers agreed to phase the tree felling over five years with up to ten poplars being cut down each year. There will also be a 75 per cent increase in the number of new trees. 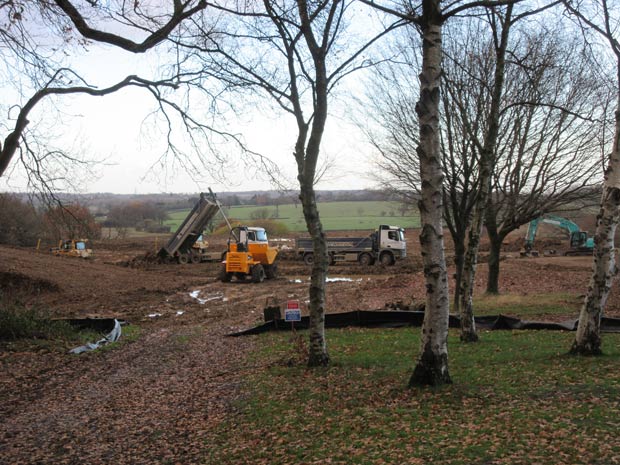 They will include extensive deciduous woodland and hedgerow planting. Other new features will include the planting of a wild flower grass land, a ditch to a new wildlife pond and bird and bat boxes.

As a result, woodland consultants believe there will be an “overall positive impact on the habitat available to local wild life species and result in a net biodiversity gain.”

Originally opposition to the scheme centred on the golf course being within a designated battlefield site.

A metal detector survey of the site satisfied Historic England that none of the material recovered – including some 16th/17th century coins – related to the Battle of Barnet and no metal artefacts were earlier than the 17th century.

On the basis of this report, consultants advised that if the battle was fought across the golf course, the area “played a peripheral role, if involved at all” and that there will be a “neutral impact” on the battlefield designation. Nonetheless the Battle of Barnet project has alerted Historic England to the fact that the haul route for incoming lorries with top soil is across fields that were also in the designated battlefield area.

Another on-going concern is the need to ensure that the top-soil and sub-soil being deposited on the site is not contaminated.

When the Shire London golf course on the other side of St Albans Road was first developed – then it was known as Bridgedown Golf Club – there was a sustained campaign by local residents to stop landfill being dumped on fields where larks used to nest each spring. Volunteers from Barnet Society and SPACES community group in Alston Road formed a rota to monitor deliveries.

After their complaints that they believed medical waste was included in the landfill, tighter controls were introduced to prevent the dumping of contaminated material.

Old Fold Manor Golf Club’s course was first laid out in 1909, and in the following year Harry Colt, who designed the Augusta course used by the US Masters, was brought in to undertake a redesign.

More in this category: « Farewell to Tam the Milkman – end of an era Keep Barnet Clean Campaign »