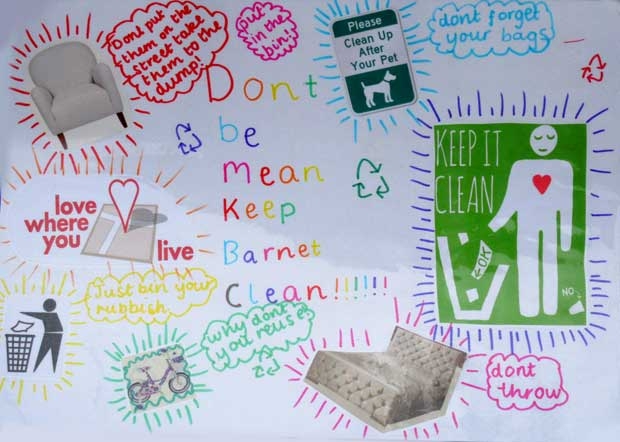 Keep Barnet Clean poster
“Don’t be mean, keep Barnet clean” is the message on posters which have been appearing outside parks and on street signs around Barnet in a do-it-yourself campaign by local youngsters.

Members of a church children’s club have been producing the posters under the direction on their leader Gill Cunnington.

Original drawings and slogans are featured on the posters which all vary in their design, but which could not be clearer in the messages they are trying to convey.

“Clean up after your dog! The poo fairy doesn’t live here...Scoop your poop! Why don’t you re-use old sofas, beds and chairs. Don’t put them on the street. Take them to the dump.”

Messages of encouragement have been posted on the Nextdoor High Barnet community website thanking Ms Cunnington for her initiative and for the flair and imagination local youngsters have shown in their keep Barnet tidy campaign.

She says that after the children’s club made the posters, they went one step further and started fastening them to fences around Barnet.

“We are trying to get the message across that it is important to love where you live.”

Among the messages of support are offers to help distribute and hang up any more of the posters produced by the club.

This do-it-yourself initiative to keep Barnet clean could not be more topical in view of repeated complaints about the tipping and dumping of rubbish in St Albans Road (opposite Old Fold Manor Golf Club) and along Galley Lane.