Farewell to Tam the Milkman – end of an era 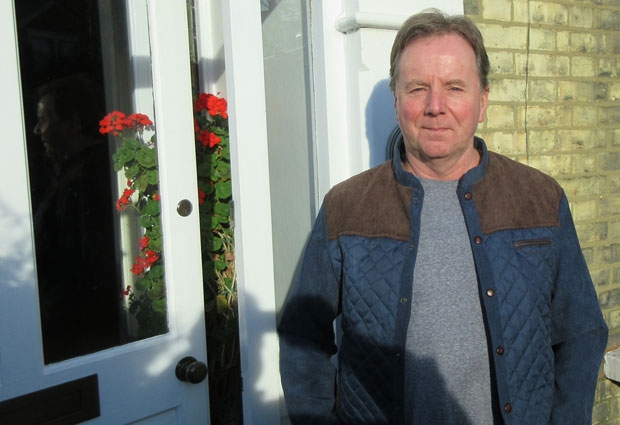 Tam Hughes, High Barnet milkman for 32 years, back in Granville Road visiting one of the streets in his former round
Customers and friends have been paying tribute to High Barnet’s popular milkman, Tam Hughes, whose franchise with Milk and More was terminated at short notice after he had been delivering milk for over 30 years. A collection to say “thank you” has already raised £220 among former customers in Byng Road and Wentworth Road.

As other households on his round are hearing of his mis-fortune they too are finding ways to express their gratitude with letters, cards and donations.

When Mr Hughes, now 59, became a milkman for Express Dairies in 1986, he was one of six serving High Barnet from a depot in Whetstone. Originally his round was made up of the streets around Alston Road and Stapylton Road.

Over the 32 years that elapsed, and in the face of competition from supermarkets, all six rounds were reduced to one – stretching from the Stirling Corner roundabout, through to Arkley and High Barnet, and on up to Hadley.

“All the support from my customers has been really heartening in recent weeks because to begin with I really did get very down on losing my round.

“I’d no idea I was so appreciated by so many people.  I realise now it is an end of an era. I was the milkman.  I was part of the community.”

Mr Hughes’ contract was terminated after a dispute about changes to his delivery schedule.

Milk and More, which is owned the Muller diary business, wants to expand its distribution network by offering customers groceries and other goods, as well as milk, which can all be ordered on line the night before.

In the process Milk and More is moving from a day-time to an overnight delivery schedule with all home deliveries having to be completed before 7 am, so that fresh milk arrives in time for breakfast.

When faced with the prospect of having to change his round to night-time delivery – and having to start work at midnight, rather than 4am in the morning – Mr Hughes made it clear he was not prepared to accept the new conditions.

As a result, Milk and More gave him three months’ notice in October that his franchise would be terminated.  He sought advice from the employment conciliation service ACAS and from a solicitor but found there was little he could do as franchise workers had very few rights.

After a further disagreement, he said he was left with no alternative but to resign in order to ensure repayment of bond money of around £6,000 that he had paid to secure the franchise.

Muller acquired Milk and More, formerly operated by Dairy Crest, in 2015 and says its force of 1,100 self-employed franchise milk roundsmen are attracting a growing number of new customers as families prefer their milk to be delivered in a glass bottle, thus helping to reduce their use of plastic.

But Mr Hughes fears that Milk and More’s claim that their business model will preserve the iconic British milkman is misplaced.

From what I understand half my 400 customers have given up their deliveries. They don’t want their milk dropped off at one o’clock in the morning by someone they never see and don’t know. They miss the relationship they had with their milkman.

“I realise, to coin a pun, that it’s no use crying over spilled milk. Milk and More are convinced they are right, but I don’t think they understand their customers.

“I used to deliver inside little estates of retirement houses and blocks of flats.  Elderly people just aren’t happy having to give that sort of access to a stranger in the middle of the night.

“Schools, factories and offices that I delivered to, don’t want milk left outside their premises all night.”

Mr Hughes’ 32-year career highlights the changing patterns in home delivery. Originally, he was an employee of Express Dairies but that changed when Dairy Crest took over and his round became a franchise.

The depot moved to Kingsbury and later to Watford requiring him to wake up at 4am to get there in time from his home in Mill Hill and then to drive his electric float down the A41 to Stirling Corner at the start of his round.

“I’m from the old school. I loved seeing my customers and getting to know them.

“I suppose the most heart-warming event was the day I probably saved the life of one of my customers in Blenheim Road off Wood Street. There was no reply so together with a neighbour we forced the door and there she was collapsed in the bath.

“Perhaps the highlight was in May 1990 when I was on the front page of the Barnet Press for winning the Express Dairies’ award for the milkman who’d signed up the highest number of new customers. The prize was a holiday for the family in Disneyland.”

The collection among former customers in Byng Road and Wentworth Road was organised by Melvyn Sears, membership secretary of the Barnet Residents Association, who said that what happened for Mr Hughes was “a tragedy after so many years of faithful service”.

“After a pretty bleak time, Tam is now looking for new opportunities with some optimism. He has been overwhelmed by the goodwill expressed to him by his previous customers.”

Among those who donated to the £220 for Mr Hughes, was an “outlier” – a former Wentworth Road resident who moved to the Isle of Wight 17 years ago but wanted to express her appreciation.

One of Mr Hughes’ former customers said that despite her support and sympathy for him, she faced a dilemma as she feared that continuing with Milk and More was probably the only way to encourage greater use of glass rather than plastic.

“Perhaps I would feel a bit of a scab for continuing with Milk and More but perhaps that’s the only way to get milk delivered in returnable bottles.”