Captivating images of Battle of Barnet 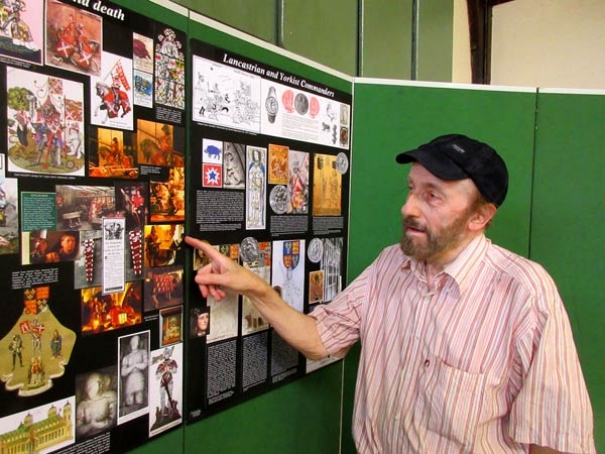 His collection of photographs, drawings and illustrations featuring the dukes, barons and noblemen who fought at Barnet, was unveiled for the first time at the annual meeting of the Barnet Society.

It provided a vivid backdrop for Helen Giles, recently-appointed co-ordinator, when she gave a presentation on the aims and objectives of the Lottery-funded Battle of Barnet project.

Mr Wheeler’s interest in Richard III and the Wars of Roses dates from the 1960s when he was captivated by the famous, ground-breaking BBC television series, An Age of Kings, which featured eight of Shakespeare’s sequential history plays from Richard II to Richard III.

His early photographs include images from 1960s productions at the Royal Shakespeare Theatre at Stratford Upon Avon, including the stage production of The Wars of the Roses that also became an acclaimed television series.

“The character of Richard III has always fascinated me: was he a villain, or wasn’t he?

Who can forget his portrayal by Sir Laurence Olivier in his 1955 film Richard III?

“In Henry VI, part III, we get the Battle of Barnet taking place in fog and Warwick the Kingmaker is killed, but we don’t know what Warwick looked like. In one portrayal, he is dressed as an Elizabethan, so clearly no one has any real idea how he appeared.”

Mr Wheeler is no stranger to celebrations of the Battle of Barnet. His collection of images includes his own photographs of the opposing armies and battlefield that was laid out for an exhibition to mark the Battle’s 500th anniversary in 1971.

The exhibition was held in the council chamber of what was then Barnet Town Hall in Wood Street, now the offices of the North London coroner.

More in this category: « BBC4 joins hunt for Barnet battle site Barnet loses another link with past »