Barnet loses another link with past 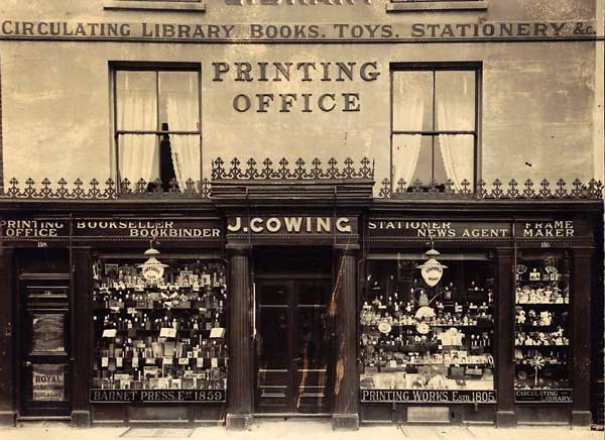 The Barnet High Street shop front of J. Cowing, publishers of the Barnet Press, as it was in July 1913
The Barnet Press, once one of the most respected weekly newspapers in North London, has ceased publication after steadily losing circulation and struggling financially.

Established in 1859 by the Cowing family, the Barnet Press was originally published and printed at its premises in Barnet High Street.

All that remains of the halcyon days of the bustling Press office and printing works is the clock on the wall of what is now the Trustee Savings Bank, and just visible, on the side of the clock case, are the embossed initials “BP”,

The last edition appeared on Thursday 27 July with a reminder to the local community from the deputy editor, Ciaran McGrath, that the newspaper’s staff will miss serving the locality and hope residents themselves will go on holding to account those in authority.

The Barnet Press became a local institution, a great favourite with its readers, and launched the careers of several famous journalists, including the former football commentator John Motson, a dominant voice on the BBC in the 1970s and 1980s.

The Cowing family were generous supporters of the town, a tradition continued by the late Miss Gwyneth Cowing, who lived at Whalebones, Wood Street, where she provided a studio in trust for the Barnet Guild of Artists and a home for the Barnet Beekeepers Association.

Tindle Newspapers, a publishing group which has saved many ailing local papers, announced with regret the closing of the Barnet Press, together with two other weekly titles, the Enfield Advertiser and Gazette and the Haringey Advertiser.

The three papers that have been closed were all produced and printed by a Tindle subsidiary, North London and Essex News Ltd, at 187 Baker Street, Enfield.

In his farewell, deputy editor McGrath admits that “economic reality has finally bitten” and the group has had to bow to the inevitable consequences of falling circulation, reduced advertising and the inexorable rise of the internet.

He hopes readers of the final edition will recognise the role played by local newspapers across the length and breadth of the country, not least in the area served by the Barnet and Enfield papers.

“We deal in the very essence of reality: the future of Chase Farm Hospital, the recent rash of knife attacks and the ongoing argument over cycle lanes – and these issues aren’t going to go away just because we have.

“It’s also worth remembering the many wonderful things the area has to feel optimistic about. Chickenshed, just a few hundred yards across the border in the borough of Enfield, is a shining example of a vibrant, inclusive theatre company positively bursting with talent which is right on our doorstep, while the Artsdepot and Wyllyotts also provide top quality entertainment.”

UK Press Gazette, which monitors the newspaper industry, says the closures will leave the London boroughs of Barnet, Enfield and Haringey with reduced local newspaper coverage.

Newsquest continues to publish the Barnet Times and Enfield Independent.

More in this category: « Captivating images of Battle of Barnet Childhood memories of 1930s Barnet »