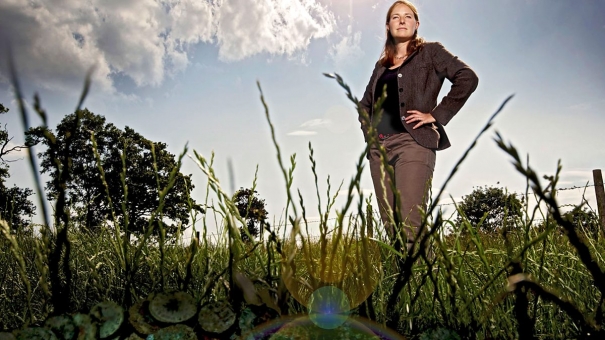 Dr Alice Roberts presents the BBC4 program 'Digging for Britain'
Two promising pointers towards locating the precise site of the 1471 Battle of Barnet were examined in the final television programme of the current archaeological series, Digging for Britain on BBC4.

Sam Wilson, the Huddersfield University archaeologist leading the hunt for the location of the battle, has always believed that the most likely area is the farmland stretching from between Kitts End Lane towards St Albans Road.

This would put the battlefield to the west of the area immediately north of Hadley Highstone that has traditionally been regarded as a possible site.

Among the medieval artefacts unearthed during the summer, by far the most promising is a mount from a horse’s harness or bridle that matches similar finds at other Wars of the Roses battlefield sites.

Mr Wilson says this find, along with other medieval items, does suggest that the fields they have been scouring with metal detectors are likely to be the scene of what was one of the fiercest battles between the Yorkist and Lancastrian armies.

“Based on the concentration of evidence we have found so far, and the lack of evidence elsewhere, I think we are getting close to finding the site.”

Digging for Britain presenter Alice Roberts describes the hunt by Mr Wilson and his team of archaeologists as they search for evidence of a battlefield site that has been lost for 500 years.

Based on the concentration of evidence
.... I think we are getting close to finding the site.

Barnet was one of the most decisive confrontations between the Yorkist forces of Edward IV and the Earl of Warwick’s Lancastrian army, and the Wars of the Roses ended with the death of Richard III and the start of the establishment of the Tudor dynasty.

Mr Wilson uses footage from his own camera to illustrate his theory that the farmland off Kitts End Lane is the site. “When we pan around you can see we are in a very large bowl in the landscape, and the land rises up all around us.”

One of the contemporary accounts of the battle says that Edward IV moved his men off the road into a marshy hollow. Edward approached the battlefield and entered this low-lying area when it was getting dark and did not know where Warwick and his men were.

Another account states that Warwick’s artillery shoots over the heads of Edward’s men, which supports the theory that the landscape was a decisive factor.

Mr Wilson shows Alice Jones the various medieval items discovered during the summer as archaeologists searched the area.  They have been scouring 2,000 acres of farmland that are littered with modern metal debris, which only adds to the challenge.

On day 60 of Mr Wilson’s diary for the Battle of Barnet project the archaeologists are in a 50-acre field when they discovered half of a medieval purse bar, that would have held a pouch or purse attached to a belt, “something that every 15th century man would have had.”

Another find was a medieval spur, and then the most interesting item of all, a mount from a horse’s harness or bridle, which exactly matches finds at other Wars of the Roses battlefield sites.

In previous years amateur metal detectorists have found cannon balls in fields in and around Hadley and Kitts End Lane, but they are harder to date precisely and the search is continuing for items that would have been left behind after the brutal hand to hand fighting that took place in the battle.

Digging for Britain East broadcast on BBC4 on Tuesday 20 December is available on the BBC iPlayer and can also be viewed below.