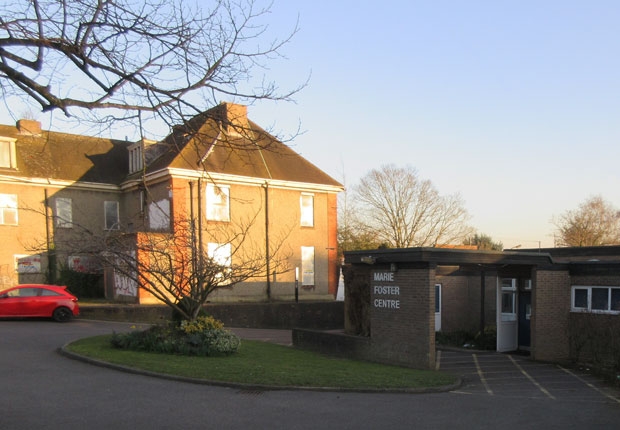 Marie Foster Centre was opened by the Duchess of Gloucester in 1973 and was the first of its kind in the country to care for young people with multiple sclerosis
Resident guardians who have had temporary homes in the former Marie Foster Centre in Wood Street, Barnet, are moving out following the approval of plans to build a 100-room care home on the site.

Since last summer an eclectic mix of tenants have had short-term rentals of rooms inside what was originally the country’s first centre for the care of young people with multiple sclerosis.

Planning approval for the construction of the £22 million care home on the 2.5-acre site – which also includes the adjoining near-derelict nurses’ home – was granted in mid-February when the temporary tenants were given a month’s notice to leave.

Demolition work on the two buildings is due to start in late spring or early summer and with an 18-month construction period, the new care home should be ready to open in late 2020 or early 2021 and will offer rooms for 100 residents and provide around 120 full and part-time jobs.

Jonnie Bayfield, an author and journalist, and his girlfriend Daniela, who were among those who rented rooms at the centre, said the Marie Foster building was one of the nicest of their recent stays as resident guardians.

“Living in a timeworn care facility might not appeal to everyone but for a cash-strapped freelancer like myself – and hard-working immigrants struggling to make ends meet – renting as a resident guardian makes a lot of sense.”

Mr Bayfield and his girlfriend paid £800 a month for part of the building, and it provided them with space for a living room, bedroom, kitchen and office.

Others residing in Marie Foster, including construction workers, a painter and decorator, and an actor, were being charged from £400 to £500 each.

“We were an eclectic mix but seemed to get on quite well. Last summer we picked enough Cox’s apples from the orchard in the Marie Foster gardens to make five gallons of cider.

“I think we all realised this was a special place to live because Marie Foster was the first centre of its kind built for people with multiple sclerosis. Opposite the door to my little apartment was the plaque commemorating its opening by the Duchess of Gloucester in November 1973.”

Mr Bayfield wrote about his experiences of living and working in Barnet – he did shifts at the Waitrose supermarket – for a feature in the Sunday Times magazine (24.2.2019).

As a veteran guardian having spent six years staying in several disused buildings across London, he described how he had “braved mould, mice and some curious neighbours” but had become a fan of an arrangement that offers short-term tenancies in vacant premises for cut-price rents.

“Obviously we have very few rights as we can be kicked out at a month’s notice, but while we can be manipulated by the agencies, we can manipulate them as the property owners are desperate to avoid these vacant buildings being taken over by squatters and they are keen to do a deal.

“The fashionable view is that guardianship is a wonder cure for the housing crisis. I’m not so sure. My inkling is that it’s simply a sticking plaster over a wound.

“About two-thirds of the people I live with are Europeans. In the midst of the Brexit chaos, I find it comforting that every ‘foreigner’ I’ve lived with – builders, bus drivers, nurses and practically all the other professions that keep us ticking along – has been nothing but kind, compassionate and absurdly hard-working.

“Most are living miles away from home, and whatever money they make is always being sent back to keep a family afloat.”

NHS Property Services sold the Marie Foster complex to care home provider Signature Senior Lifestyle and in the months before planning approval was obtained, the empty building was managed by Ad Hoc, an agency specialising in vacant property protection.

Signature take over ownership of the site in April and that is when the demolition will start. As a condition of planning approval, the main building contractors are expected to employ 30 per cent local labour, take on six local apprentices and offer ten work-experience opportunities.

The new home will need staffing equivalent to 70 full time jobs. David Roe, the group’s head of land and planning, said this would be split up to equal a total of around 120 full and part-time jobs. Recruitment will start six months’ ahead of the opening of the new home.

More in this category: « Bid to resume Battle of Barnet archaeological dig Help at Spires for heart attack victims »