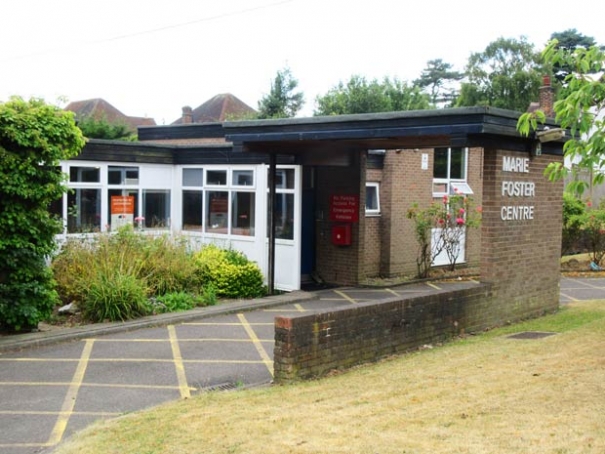 Marie Foster Centre, Wood Street – now occupied by “resident guardians”, short-stay tenants who have rented rooms while the building awaits demolition
Most High Barnet residents are familiar with the Marie Foster Centre – awaiting demolition for redevelopment – but few probably realise that when opened in 1973, the 30-bed hospital in Wood Street was the first purpose-built home in the country for young people suffering from multiple sclerosis.

The story behind its construction is equally fascinating: the centre is named in honour of the late Mrs Marie Foster, a housewife from Potters Bar, who was herself an MS sufferer and who led fund-raising efforts for what was then a highly-innovative level of care for people with neuro-muscular disabilities.

All too often young disabled people were forced to go into geriatric wards for lack of care elsewhere and there was considerable concern that some young people would lose all motivation and will to live.
Barnet supporters of the Multiple Sclerosis Society raised £75,000 to build a centre that could offer them ground-breaking care and assistance.

Older Barnet residents have fond memories of volunteering at the home. Some helped feed patients who had lost the use of their arms; others assisted with their care; joined in activities and provided entertainment

Mrs Foster, who was diagnosed with multiple sclerosis in 1947, struggled to live a normal life, attempting to do all her housework from her wheelchair.

In 1956, she and her husband, Eric, established the Barnet area and Mid-Herts branch of the MS Society and they began fund raising in 1958 after she was admitted to Potters Bar Hospital.

Her efforts to raise money generated tremendous support: she sold over 20,000 ball point pens from her hospital bed and during national MS week she sold flags from her wheelchair in the streets of Potters Bar.

Eric Foster, who chaired the committee, said at the time that they were utterly despondent, but were saved by a telephone call from the North West Metropolitan Regional Hospital Board which offered a site, next to the Victoria Maternity Hospital, and a £75,000 grant, if the branch could match that amount.

Finally, the go-ahead was given; Alderman C.H.F. Reynolds dug the first sod in October 1971; and the centre was opened by the Duchess of Gloucester, President of the National MS Society, on 29 November 1973.

Mrs Foster, who died in 1977, was one of the first six patients at the centre and was among those who greeted the Duchess.

A Barnet Press report captures the emotion of the day:

“After an hour of official proceedings, the Duchess smiled when invited to take tea with the patients – it was their first tea time – and she joined Mrs Marie Foster and Mr Jim Chalmers and other friends in the lounge where she relaxed and enjoyed tea.

“There was a poignant moment when the Bishop of Hertford (Right Rev. H.V. Whitsey) met Mrs Foster who is crippled and unable to use her arms. Despite this she raised many hundreds of pounds while a patient in Potters Bar Hospital.

“Making the sign of the cross on her forehead he said: ‘Every blessing on you. You have done a noble job’.”

Mrs Foster died in 1977, at the age of 62.  Her obituary in the Barnet Press paid tribute to all she had achieved. “She will be best remembered for her courage, cheerfulness and tireless work for the Multiple Sclerosis Society and the Marie Foster Home.”

At the height of the fund-raising campaign in the 1960s the MS Society hoped the Barnet centre would become a pilot for others around the country. It was estimated at the time that in order to take adequate care of the seriously crippled and bedridden of the 2,000 established cases in Great Britain, there would need to be at least 40 such units.

The Marie Foster centre comprised two six-bedded rooms, three two-bedded and ten single rooms, some of which overlooked an attractive patio and gardens. All the rooms had wash basins and were near toilets.

Communal space comprised a large dining room with lounge, television area; a physiotherapy and occupational therapy department; a hairdressing room; and a quiet room – all in a one-storey building for ease of access for wheelchair users.

However, by the late 1980s the centre faced fresh challenges. More and more MS sufferers were being supported in their homes and the Marie Foster Centre was being used increasingly for short-stay respite, to give carers a break, but this highlighted deficiencies in the original design.

Short-stay residents did not like living and sleeping together in six-bedded rooms and over the next two decades various plans were mooted for rebuilding and refurbishing the centre, or alternatively using the site for blocks of flats for MS sufferers.

At one point there were suggestions that the centre should become a shared home for MS sufferers and patients with long-term severe schizophrenia, who were about to be transferred to Barnet from Napsbury Psychiatric Hospital – a plan that met considerable local opposition.

Newspaper reports from the 1990s indicate that numerous options were considered and in 2000 there was a further set back when plans to “demolish the dilapidated 26-year-old centre” fell through, leaving the Marie Foster home residents in limbo. By then the central heating system was in desperate need of replacement.

In recent years the centre has been used by for recuperation by patients from Barnet Hospital – and there were suggestions the site might be used for a new health centre for local general practitioners – but finally last year NHS Property Services announced that the centre and the adjoining derelict former nurses’ home were to be sold.

Signature Senior Lifestyle, which is about to open a new care home at Bushey, are purchasing the property, subject to planning permission, as the site for a new care home for the elderly.

Initially the NHS marketed the two-and-a-half site for potential residential development, with space for 81 news homes, but the “For Sale” sign came down some months ago.

The eventual demolition of the Marie Foster Home is bound to evoke memories among those who raised money for MS Society and the many volunteers who assisted with the care of patients.
One former volunteer described how active the community used to be in supporting MS sufferers.

“My mother went regularly to help, and I started volunteering as well. I remember helping one man who always wanted to finish his meal with an orange. I had to feed him segment by segment –and he always wanted to round that off by me holding a cigarette for him to smoke!

“Later, after I trained as a hairdresser, I used to cut the patients’ hair. We were all very fond of the Marie Foster centre and I often think back to all that we did for MS sufferers.”

Perhaps you remember helping the patients or fund-raising. Please leave a comment below.