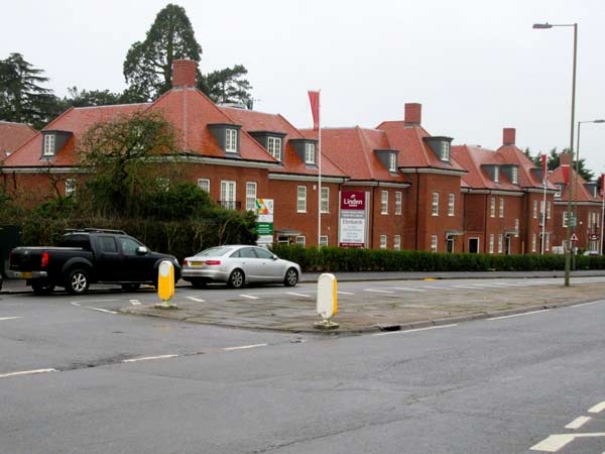 New homes in the Elmbank development are transforming the junction of Wood Street and Barnet Road
Big new housing developments such as Elmbank, opposite the Arkley public house, are changing the face of High Barnet – and plans are likely to be presented during 2018 for several more sizeable schemes.

Applications are expected for at least four further locations: the nearby farmland at Whalebones; the site of the former Marie Foster care home in Wood street; the site of the Brake Shear House workshops, just of Barnet High Street; and the site of the Fern Room, in Salisbury Road.

Elmbank, providing 114 new homes on the site of former nurses’ homes for Barnet Hospital, is rapidly taking shape and is transforming the appearance of the junction of Wood Street and Barnet Road, Arkley.

New flats and homes already appear to dwarf the next door smallholding at Whalebones, where Hill, a Waltham Abbey housebuilder, is preparing plans to build on up to 11 acres of woods and farmland.

Further consultations are scheduled for early 2018 when the developers promise to meet with local campaigners fighting to save Whalebones, who include the Chipping Barnet MP Theresa Villiers.

Hill has been commissioned by the Gwyneth Cowing trustees to prepare a scheme to develop the three fields that encircle Whalebones house, which is privately owned, and which is not involved in the redevelopment.

The largest of the three fields adjoins the Elmbank site and is considered a prime location for new housing.

The Marie Foster site was put up for sale by NHS Property Services in October and now appears to have been sold, as the “For Sale” sign has been removed, and so has all the previous NHS signage.

When the two-and-a-half-acre site was released for sale, NHS Property Services said there was space to construct up to 81 new homes, a mixture of houses and flats.

According to unsuccessful bidders for the site, NHS Property Services drew up a short list of three companies: one applied to build housing; another planned to build a care home with some new housing; and a third had plans to use the entire site for a new 60 to 80 bed care home.

The Marie Foster site was considered suitable for a new care home because it was close to the High Barnet shopping centre, London Underground and buses; and was also close to Barnet Hospital.

Shanly Homes, which purchased the Brake Shear House site from another developer Wrenbridge, is expecting to submit a fresh planning application early in 2018.

Wrenbrdige had previously obtained planning approval for 32 flats and eight semi-detached houses, but Shanly Homes has appointed new architects and is looking at a number of options for the site.

A detailed planning application is also expected from SAS Investments for its plans to build a three-storey block of ten flats on the site of the Fern Room in Salisbury Road, currently a day centre for Barnet Old People’s Welfare Committee.

Barnet Council is under pressure from the Mayor of London, Sadiq Khan, to agree sites for new housing.

In November, a new housing plan for London suggested that Barnet should grow by 30,000 homes between now and 2029, one of the highest targets for an outer London borough.

Under the draft plan, the Mayor proposed that a third of the new housing would be built on small sites, including in back gardens and upward extensions of existing houses, apartment blocks and shops.

More in this category: « Saving Whalebones for community use The Mayor of London New London Plan »
back to top