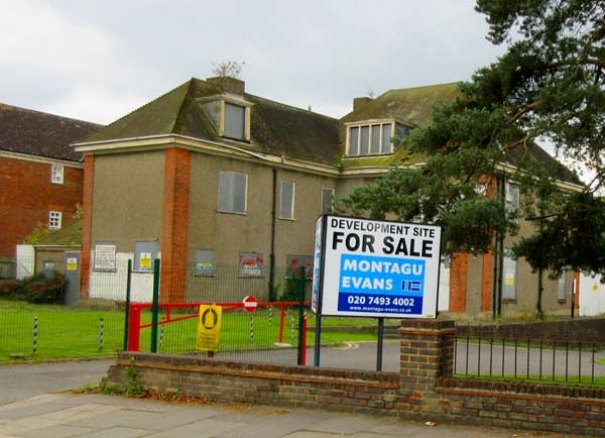 The former Marie Foster Centre now to be developed
A derelict former nurses’ home that has been an eyesore for years will finally be demolished under plans to build flats and townhouses on the Marie Foster Care Home site in Wood Street, Barnet.

NHS Property Services has put the two-and-a-half-acre site up for sale. Potential purchasers are being supplied with a design for redeveloping the area to provide a total of 81 new homes.

The site is in the middle of the Wood Street conservation area with historic alms houses opposite and other nearby listed buildings, which together form a highly-desirable location for new housing.

While there is likely to be universal acclaim that a decision has finally been made to demolish what was once the nurses’ home for the former Barnet Maternity Hospital, there might well be opposition to the scale of the housing development proposed for the site.

A pre-planning application report being made available by the agents, Montagu Evans, proposes the construction of three blocks of flats together with seven townhouses. around a central public amenity space.

There would be two accesses to the flats and townhouses -- from Wood Street, as at present, and from a new access off Cattley Close, leading to the new buildings at the rear of the site.

The seven townhouses would each have four bedrooms.

There would be 105 car parking spaces, ten of which would be for disabled drivers.

NHS Property Services has been criticised by the Barnet Society among others for what have been years of indecision over the future of the boarded-up nurses’ home and the Marie Foster Care home buildings.

A decision on the future of the site has been “imminent” for the last five years, but the first local organisations knew that its fate had been agreed was when a “For Sale” was put up outside.

Although it seemed likely at the end of last year that the site was to be sold off by the NHS, the Chipping Barnet MP, Theresa Villiers, was then informed that its possible use for the health service was being reconsidered.
She told the Barnet Society in February that the continuing dereliction and indecision was an outrage.

The very last she heard at the start of the year was that the NHS had almost made a decision that it was not needed for health purposes.

More in this category: « New proposal for Ark Underhill school to go ahead »