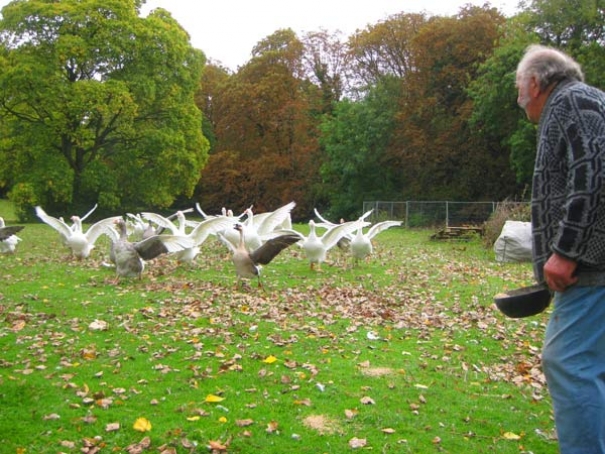 Peter Mason 79, with his poultry flock, has been farming at Whalebones for the last 50 years
Trustees for the Gwyneth Cowing estate have given an assurance to the Barnet Society that any development of Whalebones Park for residential and community use would be of “high quality” and would retain as “much natural habitat as possible”.

In the two weeks since the Society first reported that an application has been made for outline planning permission to develop this 14-acre stretch of fields and woods, between Barnet Hospital and Wood Street, over 30 comments have been posted on the website and Facebook.

Most of those responding want Barnet Council to refuse planning approval and say that Whalebones – “a lovely, historic green lung for Barnet” – should be preserved to prevent further suburban sprawl.

Several calls have been made for a petition to see if the council can be persuaded to retain the fields and wood and open them up as a public park.

In a letter to the trustees, Robin Bishop, chair of the Society’s planning and environment group, says the local community would regret the loss of “a remarkable green enclave and working farm” close to the heart of Chipping Barnet.

If Barnet Council does decide to accept the principle of the land being developed, the Society would not be willing to give its support unless any new building and landscape was of “high design quality”, and the development was “an exemplar of environmental sustainability, retaining as much existing natural habitat as possible”.

In their statement the trustees say they agree with the Society’s two criteria, and insist they would retain control over any proposals a developer might make.

The trustees wanted to reassure the Society and Barnet residents that they “do have the right intentions as far as Whalebones is concerned”.

A decision from the council as to whether the land is to be zoned for residential and community use is expected in January.

In their original statement two weeks ago, the trustees said it was their intention to allow public access to any permitted new development, and there would be a new purpose-built community building, and an open space.

A new community building would include a studio for the Barnet Guild of Artists and space for Barnet District Beekeepers, two groups that the late Miss

Cowing wanted to have continued use of buildings on the estate “so long as practicable”.