Developers to unveil plans for housing at Whalebones 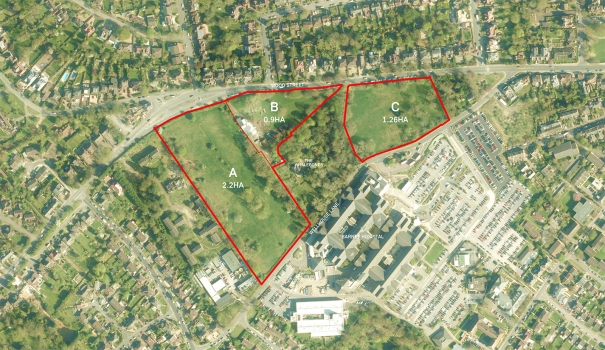 An image issued by the developers shows the Whalebones woods and fields divided up into three plots to be used for residential development and new public green spaces.
After months of speculation about the future of the Whalebones estate of woods and fields in Wood Street, Barnet, the trustees are about to announce further details of what they say will be “high-quality residential development” together with green spaces open to the public.

New public footpaths through the 11-acre site are among the proposals to be unveiled at a community workshop where local residents will be able to give their comments.
A masterplan for the site has been prepared by Hill, the Waltham Abbey development company working with the trustees of the late Gwyneth Cowing.
The trustees say they want to find “a long-term future” for the land because of the cost of maintaining the woods and farmland and due to “dwindling funds” in Miss Cowing’s legacy. The master plan proposes:

Whalebones is one of High Barnet’s much-loved green spaces and the Chipping Barnet MP, Theresa Villiers, has chaired several meetings at which local residents have considered ideas for preserving the site.

Among the suggestions discussed has been the possibility of canvassing support for the opening of a city farm for schoolchildren, or possibly the creation of a public garden for patients and visitors at nearby Barnet Hospital.

New flats and homes on the adjoining development at Elmbank already appears to dwarf the Whalebones small holding where the tenant farmer Peter Mason has farmed much of the land since 1962.

No mention of the future of the small holding is made in the latest consultation document sent to nearby residents.

Whalebones house – with the well-known blue whale jaws erected at the entrance to its drive – is privately owned and is not included the trustees’ development plans as it was sold off by the estate some years ago.

Further details are available at the project’s website, www.whalebones-consultation.co.uk and applications to register to attend the workshop at Whalebones on 7.6.2018 must be submitted by 5.6.2018 by email to This email address is being protected from spambots. You need JavaScript enabled to view it.

More in this category: « Barnet Market & Premier Inn - An opportunity slipping away Whalebones: up to 180 homes plus green spaces »