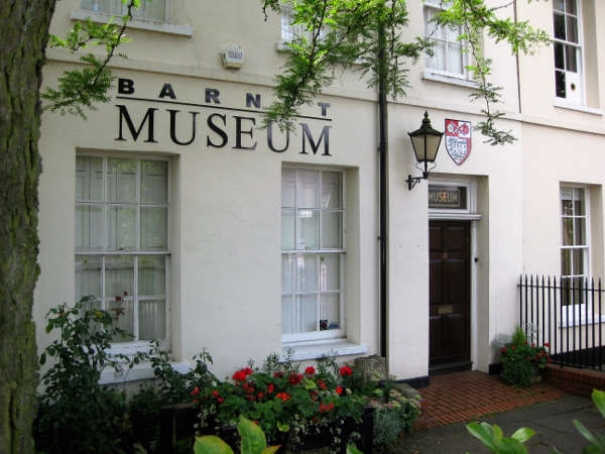 The Barnet Museum, Wood Street
Volunteers at Barnet Museum say they are shocked and dismayed that after months of discussion Barnet Council’s planning committee has refused to approve proposals for a rear extension and disabled access.

Plans for the redevelopment had already been revised to meet earlier objections from the planning department, in the hope of gaining approval, but the committee’s Conservative majority voted narrowly against granting permission.

The lack of wheelchair access is a long-standing failing that the trustees and staff thought would finally be resolved if approval could be gained for a rear extension to the museum’s premises in Wood Street.

Mike Noronha, the deputy curator, told the planning committee meeting (26.11.2015) that the museum’s volunteers and supporters were “ashamed and embarrassed” that they have to discriminate against people with mobility issues who would like to see the exhibitions.

Under the plan, the museum hoped to extend its basement to provide more conservation and storage space; extend the ground floor to provide more exhibition and display space, together with disabled access; and extend the first floor to give more room for research and education work.

Mr Noronha tried to tackle head on the criticism of planning officers that an extension would be built out into the garden in the Courthouse recreation ground at the rear of the museum, next to the former town hall, all part of the Wood Street conservation area.

He said that the extension would take up only 0.5 per cent of the garden, so it could hardly be considered injurious to the preservation of a green space.

In recent years the garden had become a secluded haven that was often used by local druggies and drunks.

“Barnet Police regularly have to clear the area of anti-social behaviour, and we frequently find nitrous oxide capsules and alcohol cans on our fire escape.”

In a statement after the application had been rejected, the museum said volunteers had been shocked to read apparent inaccuracies in the planning officer’s report.

They could not understand the negative comments made by Conservative councillors on the planning committee.

Labour councillors who spoke up in support of the application were outvoted.

“We desperately need extra space for exhibitions, children’s activities and storage, and we have just embarked on our biggest heritage project, to find the precise site of the Battle of Barnet.

“The museum is going to be the centre for interpreting any archaeological finds from the excavations that are under way.

“We are leading a project that could create interest and activity in Chipping Barnet, boosting tourism and our local economy in the same way that businesses have benefited in Leicester from the discovery of Richard III’s remains.”

Another ongoing dispute with the council concerns ownership of the building the museum has occupied since it opened in 1938.

For some years the museum has been seeking a long-term tenancy, possibly through a community asset transfer. But the council has proposed that the museum should pay “full market rental value”, and that could mean a rent as high as £30,000 a year.

There may be some “financial assistance in the form of a rebate” said the council, but the aim would be to have a “phased withdrawal” of the subsidy, and for the museum to move towards paying the full market rent.