Barnet’s Wars of the Roses celebration 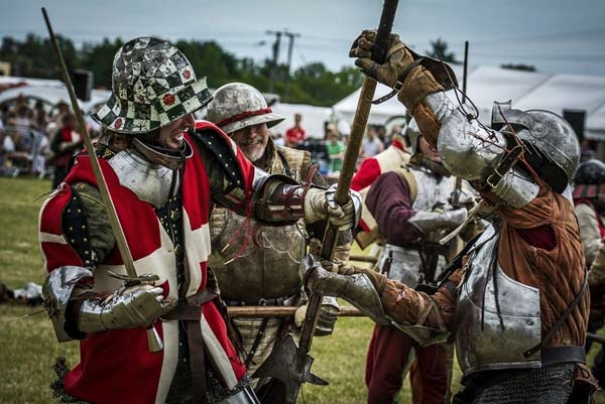 The Medieval Siege Society at Sandwich Medieval Festival last year. They will be providing demonstrations at our Medieval Festival in Barnet on Sunday, 11th June Matthew Crosby
Barnet’s first medieval festival is to be held at the Old Courthouse Recreation Ground at the rear of Barnet Museum on Sunday 11 June.

A demonstration by the members of the Medieval Siege Society -- in Wars of the Roses military attire – and a medieval food tasting will be just two of the attractions.

Medieval festivals and re-enactments linked to Wars of the Roses battlefields such as Bosworth and Tewkesbury have proved highly popular and a big draw for visitors.

Arranging an expanded annual celebration is one the objectives of the Battle of Barnet Project which is planning a programme of events following receipt of a grant for £98,000 from the Heritage Lottery Fund.

In previous years Barnet Museum has commemorated the 1471 Battle of Barnet at its annual Sunday afternoon tea in the park, but this year’s event has been expanded to reflect the Project’s aim to explain and promote Barnet’s role in the Wars of the Roses.

Admission to the festival (from 12 noon to 5.30pm) is free. There will be live music and children’s activities.

Barnet is the only battlefield within Greater London registered by Historic England.

One of the commanders who fought on the morning of 14 April 1471 was the 18-year-old Duke of Gloucester, the future King Richard III, who was later killed at the Battle of Bosworth.

Fighting at Barnet were the armies of two kings, Edward IV and Henry VI.

An archaeological investigation, generously funded by the Hadley Trust, started last year in fields to the north of the obelisk on Hadley Green that commemorates the battle.

Finds from the dig are currently being assessed by a team of experienced military archaeologists.