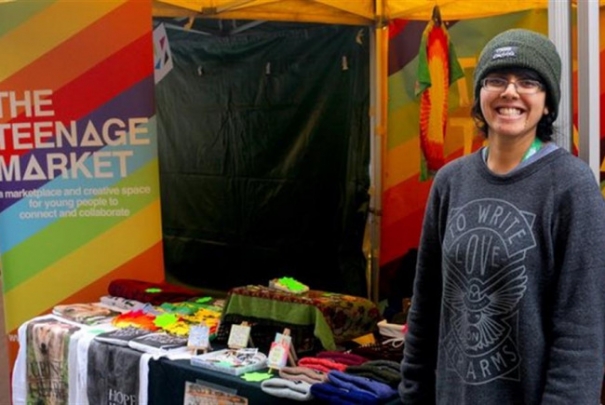 Teenage Markets come to Barnet
In recent years Barnet Market has been a shadow of what it once was, but a life-line is at hand.  Imaginative plans are being promoted to use the site for a monthly market place where teenagers can set up stalls and present live entertainment.

A crowd-funding campaign has been launched to gain pledges of financial support that could be matched by a grant from the crowd-funding budget promised by the Mayor of London, Sadiq Khan, to kick start a range of projects across the capital.

Barnet and Southgate College and the University of Hatfield have both expressed “growing enthusiasm” for the idea, and there is backing from Hunter Asset management, who operate the Spires shopping centre.

The new teenage market would be held once a month at the St Albans road market place for a trial period of a year from April 2018, and would be staged in the post-school, pre-evening time.

On offer will be stalls for young people wishing to sell and a sound stage for teenagers wanting to try out their ideas in front of a live audience.
Bob Burstow, secretary to the Barnet Town Team, initiated the bid to launch a crowd-funding campaign linked to the match funding promised by the Mayor.

“The Town Team had just got clearance to start fundraising. Pledges of support from as little as £2 are only collected if the total target is reached within the deadline.

“Barnet has an historic but fading market, and young people in the town have a limited outlet for their entrepreneurial and performance skills. Addressing these two needs together will benefit both.

“The money raised will buy infrastructure: stalls, staging, amplification, café seating and temporary roofing.  It will also fund services for the 12-month pilot: site crews to set-up and take-down, cost of extra policing (if necessary) and cleaning,” said Mr Burstow.

He plans to spend the next month spreading the word about the possibility of a Barnet teenage market among local secondary schools, and also encourage residents to join in the crowd-funding.

“The number of people who pledge is critical to the Mayor’s fund matched contribution, and the number of pledges made in the next month is the first critical measure.”

The deadline for bids to the Mayor’s Crowdfund London idea closed on June 5. Among the projects that have also gained clearance for fund raising are for a community hub café in Tottenham, a suburban farm in Tolworth, and a free film festival in Ealing.

Follow the link to support “Teenage markets come to Barnet”

More in this category: « Manorside's Great Get Together Perfect weather for jazz afternoon »