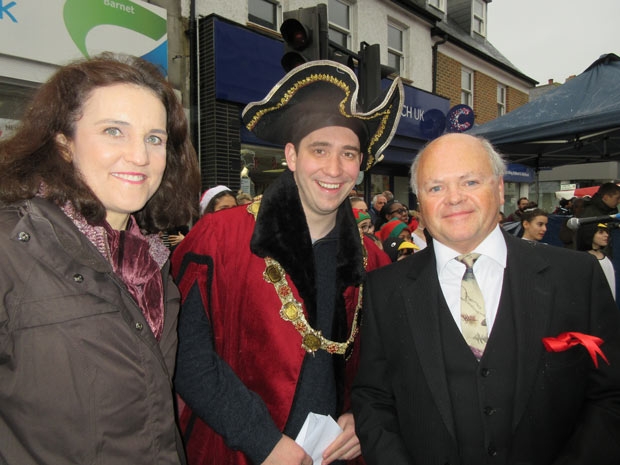 The official line-up at the opening of Barnet’s Christmas Fayre – Theresa Villiers, MP for Chipping Barnet, the “Lord Mayor of London, Richard Whittington” (David West) and fellow actor, High Barnet Councillor David Longstaff, who is the pantomime dame in Dick Whittington at The Bull Theatre.
Barnet’s annual Christmas fayre broke with tradition this year. Instead of being opened by the Mayor of Barnet, the ceremony was conducted by the “Lord Mayor of London, Councillor Richard Whittington” – star of the Christmas pantomime at the The Bull Theatre.

Dick Whittington (David West) declared the fayre open after he was introduced by another member of the cast, David Longstaff – who in addition to his role as councillor for High Barnet will be appearing at The Bull Theatre as Dick Whittington’s dame.

Theresa Villiers, MP for Chipping Barnet – fresh from a round of television interviews – was the only member of the platform party not to be doubling up as a pantomime character.

In her welcome, she congratulated the Dick Whittington cast and pupils from the Susi Earnshaw Theatre School for brightening up the fayre on what was an overcast day of mixed weather.

Ms Villiers said she hoped residents and visitors would enjoy the fayre and help give a boost to local charities and stallholders as well shopkeepers in the town centre.

Leading the procession along the High Street was the marching band of the 1st Barnet Boys’ Brigade and Girls’ Association following by dancing elves, snowmen and penguins from the theatre school.

Dick Whittington and other cast members visited stall holders and talked to visitors to help promote the pantomime which opens on Saturday 15 December and runs until Sunday 30 December.

New attractions this year included the Teenage Market at the bandstand entrance to the Spires shopping centre.

Stallholders included a young enterprise team from the Henrietta Barnett School – five pupils who are promoting their own invention, a bracelet that can be worn by young women and acts as a personal alarm when activated.

They hope to start selling the Soteria bracelet – named after the Greek goddess of protection – next February. It will cost £12.

Siya Bandhari, one of the five pupils manning their stall, said they came up with the idea of designing a hidden alarm because parents are worried about their safety and they wanted to come up with a practical solution.

“What we have designed is an acrylic bracelet which has an internal electrical circuit and when pressed an alarm sounds via a small loudspeaker. “The bracelet is worn on the wrist and we think it is very fashionable. “When the alarm is sounded passers-by would know that someone was in need of assistance.”