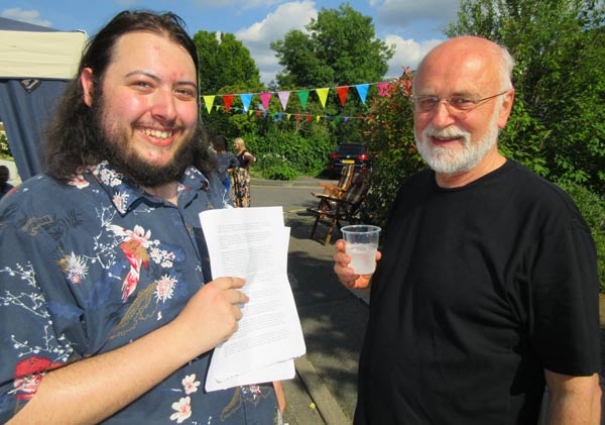 Quizmaster Curtis Gallant (left) holding the answers close to his chest, together with Tony Barnes, one of the organisers of Manorside’s street part in memory of Jo Cox
Manorside, High Barnet, joined thousands of other communities around the UK in holding a street party in a memory of the murdered MP Jo Cox.

Residents from houses in the cul-de-sac, and adjoining flats in Manor Road, spent the afternoon in the sunshine taking part in the Great Together Day event (17.6.2017).

All the proceeds from a collection and a variety of games and challenges were in aid of the Jo Cox Foundation.

Many of the refreshments were donated by local businesses, including the Victoria Bakery, Carluccio’s and Waitrose supermarket.

One of the organisers, Tony Barnes, said they were determined to make it a moment the residents could get together, put aside the divisive politics of recent months, and celebrate the British spirit of togetherness.

Over 40 neighbours and friends joined in, a gesture much appreciated by Eden Gallant, back home in Manorside from his studies at York University.

A street party like this does bring everyone together, young and old, an opportunity to put our differences aside, about the inequality of society and the arguments over Remain and Leave.”

A highlight of the afternoon was a quiz about Barnet compiled by Curtis Gallant. Several of the most challenging questions related to Charles Dickens’ connections to Barnet; explaining the Dickens’ quote that Barnet was a town “where every other house is a tavern”, a reference to the days in the 19th century when Barnet had 25 licensed premises catering for travellers on the 150 stage coaches that passed through the town on the Great North Road.

Another related to the fact that the first-ever film, “Birt Acres” was filmed and screened in Barnet, at 19 Park Road in 1895.

Hilary Leslie, who helped organise the event, praised local traders for donating prizes for the raffle. Andy Leslie was the children’s entertainer, showing them how to make animals out of balloons.