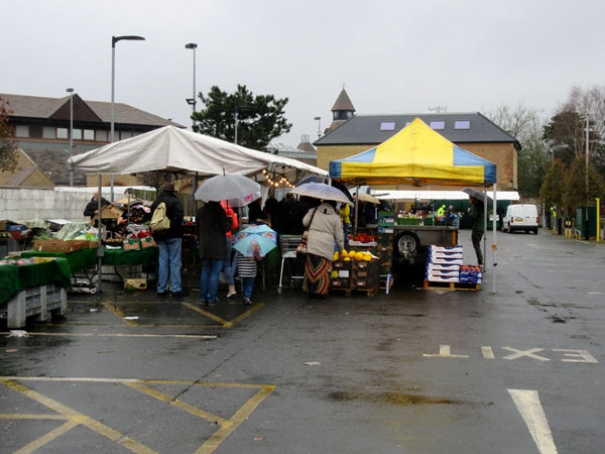 Stall holders at Barnet Market hope the switch to a site closer to the Spires will boost trade
If planning approval is given, a Premier Inn hotel and restaurant is to be built on the historic St Albans Road site of Barnet’s much reduced stalls market.

Nearby residents and local community groups are to be consulted later this month on proposals for the redevelopment following the sale of the land by the owners of the Spires shopping centre to Locate Developments.

Final decisions have yet to be taken on the scale and size of the new hotel, and the precise number of bedrooms.

A spokesman for the developers said that the hotel would be managed by Premier Inn Hotels and will include a restaurant on the ground or first floor.

“Initially our priority is to ensure the relocation of the market. We are ready to help with this and we have already been in contact with Friends of Barnet Market.

“We will be holding consultations later this month residents in Chipping Close, whose houses face the market site, and with the Barnet Society and the Barnet Residents Association.”

Plans have been afoot for some months to move the market from its St Albans Road site – which until recently doubled up as a car park on non-market days – to the paved bandstand area at Stapylton Road, in front of the Waitrose entrance to the Spires.

This was previously a temporary home for the market when the St Albans Road site was being resurfaced after what in recent years have been a difficult trading times for the market following the demolition of the buildings that once housed Barnet’s former cattle market.

Regular stall holders at the Saturday market – including two selling fruit and vegetables and two others, selling fish and meat – have said they would welcome a move to the bandstand area if it could become their permanent home once again.

They believe custom would increase if the market was closer to the shopping centre entrance and the car parks.

This was the site for the first Barnet Teenage Market, held on Easter Saturday. The next teenage market is on Saturday 5 May.