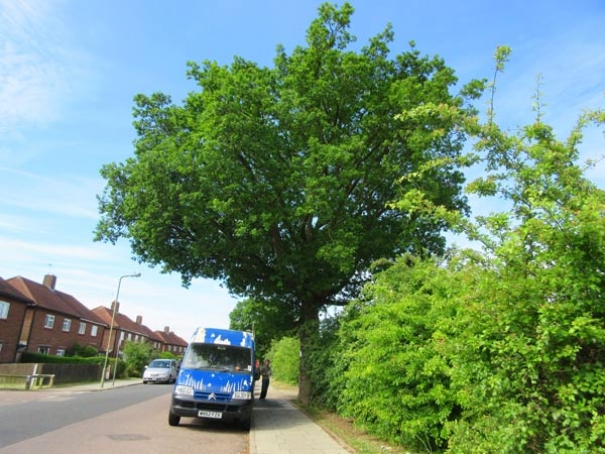 The reprieved oak tree
After a determined campaign by local residents the “mighty oak” of Whitings Road has been saved from the axe.

Barnet Council has approved a tree protection order and, more importantly, has agreed to change its plans for the approach road to a proposed housing development on land next to Whitings Hill Primary School.

Under the original plan the access to an estate of new houses and flats would have been from Whitings Road via a new approach road directly opposite Mineral Close, and this would have involved cutting down an oak tree that is well over 100 years old, and a favourite local landmark.

Notices have now been posted in Whitings Road announcing that the original plan has been amended to provide access to the development via the existing access road to the Whitings Hill school car park.

Barnet Council says the plan was amended after protests by local residents prompted a review of the original proposals, and the intention now is to alter the access road to the school to provide joint access.

Because the oak is now covered by a tree protection order, the council says care will be taken to provide a load-bearing trackway to limit any damage to the roots.

Pruning of low-level branches that might shade the gardens of the new houses will be done in accordance with the protection order, so as to reduce harm to the oak.

Paul Ashby, one of the residents who campaigned for a tree protection order, said the council’s decision to save the “mighty oak” was great news, but it would depend on the school agreeing to a joint access road.

“We are also concerned by the council’s intention to modify the plan and reduce the number of new homes. Barnet said to begin with that 50 per cent of the new properties would be affordable social housing. We want that undertaking honoured.”

The original proposals suggested the new development would comprise 29 two- to three-storey houses and an apartment block of three or four storeys providing seven flats. Further details are likely when the plans are considered at the next meeting of the council’s planning committee on 15 October.

More in this category: « Ancient oak tree might be spared Whalebones Park to go for houses? »