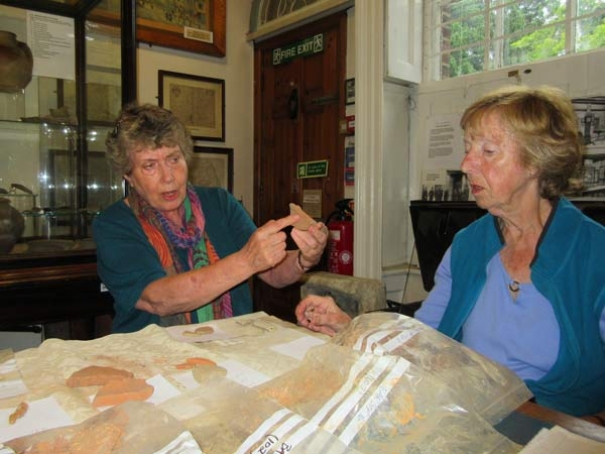 Barnet Museum volunteers Margaret Luck (left) and Pat Alison examine pottery and masonry fragments
Fragments of pottery and tiles found during an excavation of land within Wrotham Park has confirmed that the hamlet of Kitts End did exist during the 1471 Battle of Barnet – and that in fact there was probably habitation there as early as the 11th century.

Finds from eight test pits that were dug last month have now been washed and cleaned at Barnet Museum, and verified with the help of experts at the British Museum and the Museum of London.

The pieces of broken pottery, tiles and masonry seem to indicate that there was a settlement at Kitts End throughout the medieval period, from the 11th to the 15th century, and that therefore it might wel have been the closest habitation to the Battle of Barnet.

Sam Wilson, a military archaeologist from Huddersfield University, who is leading the survey and excavation to locate the precise site of the battlefield, thinks that what became one of the grisliest confrontations of the Wars of the Roses might possibly have taken place in the rolling fields between Kitts End Lane and what is now the main road to St Albans.

With the help of a team of volunteers, he dug a series of test pits inside an ornamental plantation that stretches to the western boundary of Wrotham Park.

In the mid-1800s the Byng family expanded their estate, and the land that was cleared included the remains of a cluster of hostelries, inns and houses at Kitts End, midway between Barnet and South Mymms, alongside what was then the original road to St Albans.

Maps from the 1750s show there were a dozen or more properties in the hamlet, but the land is now the Wrotham Park pinetum and includes cedars, sequoias and Scots pines, all said to be at least 150 years old.

The fragments of pottery, tiles and other remains were washed and cleaned at Barnet Museum under the leadership of Margaret Luck, who said that she and her volunteers were so excited when they heard that the items date from the 11th to the 15th century.

“We now know that the Kitts End hamlet did exist at the time of the Battle of Barnet, and that in fact it was the site of a settlement far older than many of us had previously believed.

“Perhaps the most interesting item was a wet stone that might have been used to sharpen swords; there was also a glazed jug handle.

“We’ve all driven along Kitts End Lane so many times, but now we have an insight into the settlement that was there for so many centuries and has now disappeared, so you can understand our sense of wonderment.”

Ms Luck and her volunteers spend two mornings a week washing and cleaning finds brought to the museum by Sam Wilson and his team of metal detectorists who have been searching nearby fields.

“Obviously a lot of the finds turn out to be junk, like bottle tops, or modern coins such as pennies, even a three-penny bit, but what really excites us is the moment we get a real sense of history.

“One of the finds was a small bell. Once washed and cleaned, I rang it, and we realised we were hearing a sound from centuries ago. So after a moment like that, no wonder our team is so dedicated.”