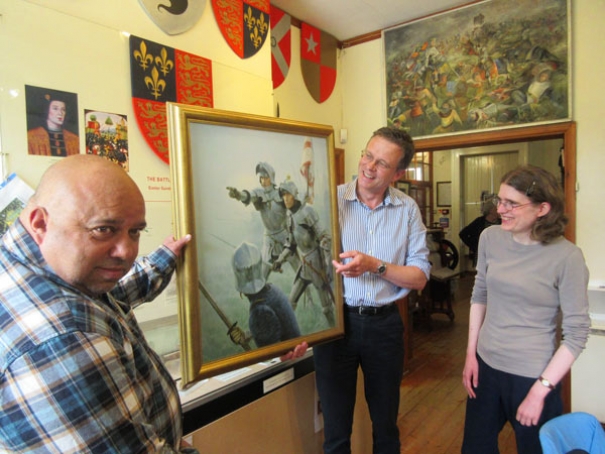 Medieval military artist Graham Turner with his painting Challenge in the Mist. From left to right, Mike Noronha, curator, Barnet Museum; Graham Turner; and Fiona Jones who is leading the museum’s bid for financial support from the Heritage Lottery Fund.
A print of Graham Turner’s celebrated painting of a young Richard III looking apprehensively across towards the Lancastrian army at the 1471 Battle of Barnet, is to go on display at Barnet Museum to help promote the current archaeological survey to determine the precise site of the battlefield.

Mr Turner, a leading medieval military artist, hopes the loan of a print of “Challenge in the Mist” will boost interest in Barnet’s role in the Wars of the Roses, and the museum’s bid to gain financial support from the Heritage Lottery Fund.

“The dispute among military historians about exact site of Barnet’s battlefield is one of the great mysteries of the Wars of the Roses, and as a medieval military artist, I would be as fascinated as everyone else if the archaeological team from Huddersfield University can find the answer.”

In his painting, the young Richard III – then the 19-year-old Duke of Gloucester – is beside his standard bearer who is pointing towards the Lancastrians’ position. 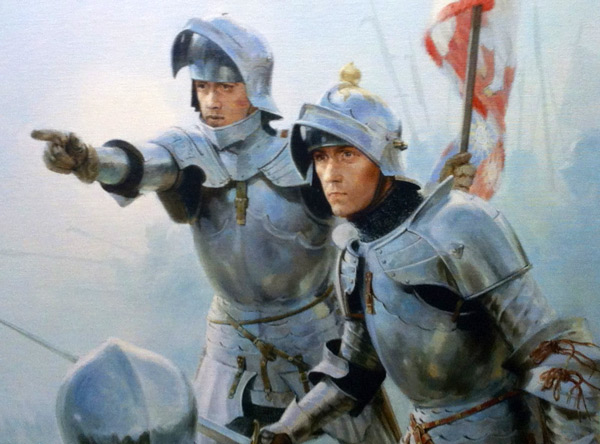 Both men are straining to see the enemy, “apprehension mixed with excitement as they anticipate the slaughter that is to come”.

Howard Simmons, the Battlefields Trust’s representative on the Battle of Barnet Project, said the loan of the painting was another important addition to the museum’s expanding display of drawings and artefacts associated with the battlefield.

“Graham Turner is recognised as perhaps the leading contemporary medieval military artists, and the detail of his paintings comes from personal experience. Graham jousts quite regularly wearing a full plate of armour, and what is so important about his paintings is that they are so accurate historically.”

Sam Wilson, who is leading the archaeological survey and investigation, thought that Mr Turner had captured the unease there must have been when the Yorkists first saw the Lancastrians through the mist, just north of Barnet, on the morning of Easter Sunday, April 14, 1471.

Currently Mr Wilson and volunteer metal dectorists are hard at work surveying fields to the west of Wrotham Park.

Farmland between Kitts End Lane and St Albans Road is one of the areas which the archaeologists think is highly promising for investigation, as the general topography fits descriptions of the battlefield landscape.