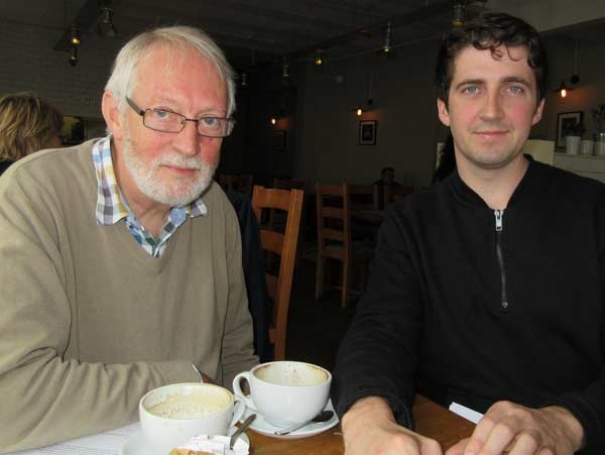 Robin Bishop, chair of the Barnet Society (left) was briefed by Culainn Shanahan on his plans to undertake a research study into future options for safeguarding as much as possible of the Whalebones green space
A survey is to be undertaken to discover the extent of local interest and reaction to the prospect of housing development on the Whalebones green space, between Barnet Hospital and Wood Street.

Hill, a Waltham Abbey housebuilder, has been commissioned to prepare plans for “sensitive redevelopment” in parts of the 11 acres of woods and farmland that are owned by the trustees of the Whalebones estate.

Although not designated as green belt land, Whalebones is regarded as a significant green space within the Wood Street conservation area and local amenity groups have urged Barnet Council to recognise the importance of what is a significant tract of woodland, farmland and biodiversity.

To test local opinion and gather views on environmental safeguards and possible community involvement, a survey and research study has been launched by Culainn Shanahan, son of Patrick Shanahan and Helena Boland, owners of Whalebones house.

Mr Shanahan intends to speak to householders within a half mile radius of Whalebones; collate information on the status of the Whalebones green space; and discuss options with residents at a workshop at the end of August.

He can be contacted at This email address is being protected from spambots. You need JavaScript enabled to view it. or via his website www.culainn.com

His parents’ house is at the centre of the Whalebones green space, but is separate from the Whalebones estate. At the Wood Street entrance to the house are the historic whalebones after which the property is named.

We know that the developers are preparing plans for the possible redevelopment of the fields to the west and east of the house...

“We know that the developers are preparing plans for the possible redevelopment of the fields to the west and east of the house, and my parents have asked me to investigate options for local participation,” said Mr Shanahan, who has just completed a master’s degree in design at the Royal College of Art.

“We would like to hear from local wildlife groups, amenity associations and other interested organisations to discover what they think of Whalebones being redeveloped and whether they can think of alternative options.”

At a meeting with Mr Shanahan, Robin Bishop, chair of the Barnet Society, agreed that any attempt to pull together local thinking on the future of the Whalebone estate would be of value.

“There has already been a consultation exercise and representatives of the housebuilders Hill have held workshops with residents, but so far we have heard nothing further.

“We have suggested that the developers put forward options that can be considered by local amenity organisations, so that we can have the kind of input that has been promised.

“Our understanding is that come the autumn, we would expect a response of some kind and some indication of what kind of development is intended,” said Mr Bishop.

In a prospectus for the workshops held on behalf of Hill, the development team said that much of the existing green space would be retained, together with the mature trees; new parkland spaces would be opened up for use by the community; and a home on the site would be retained for the Barnet Guild of Artists and Barnet Beekeepers Association.

More in this category: « Blot on landscape lives on New proposal for Ark »