Help us save the grand old lady of Lyonsdown Road 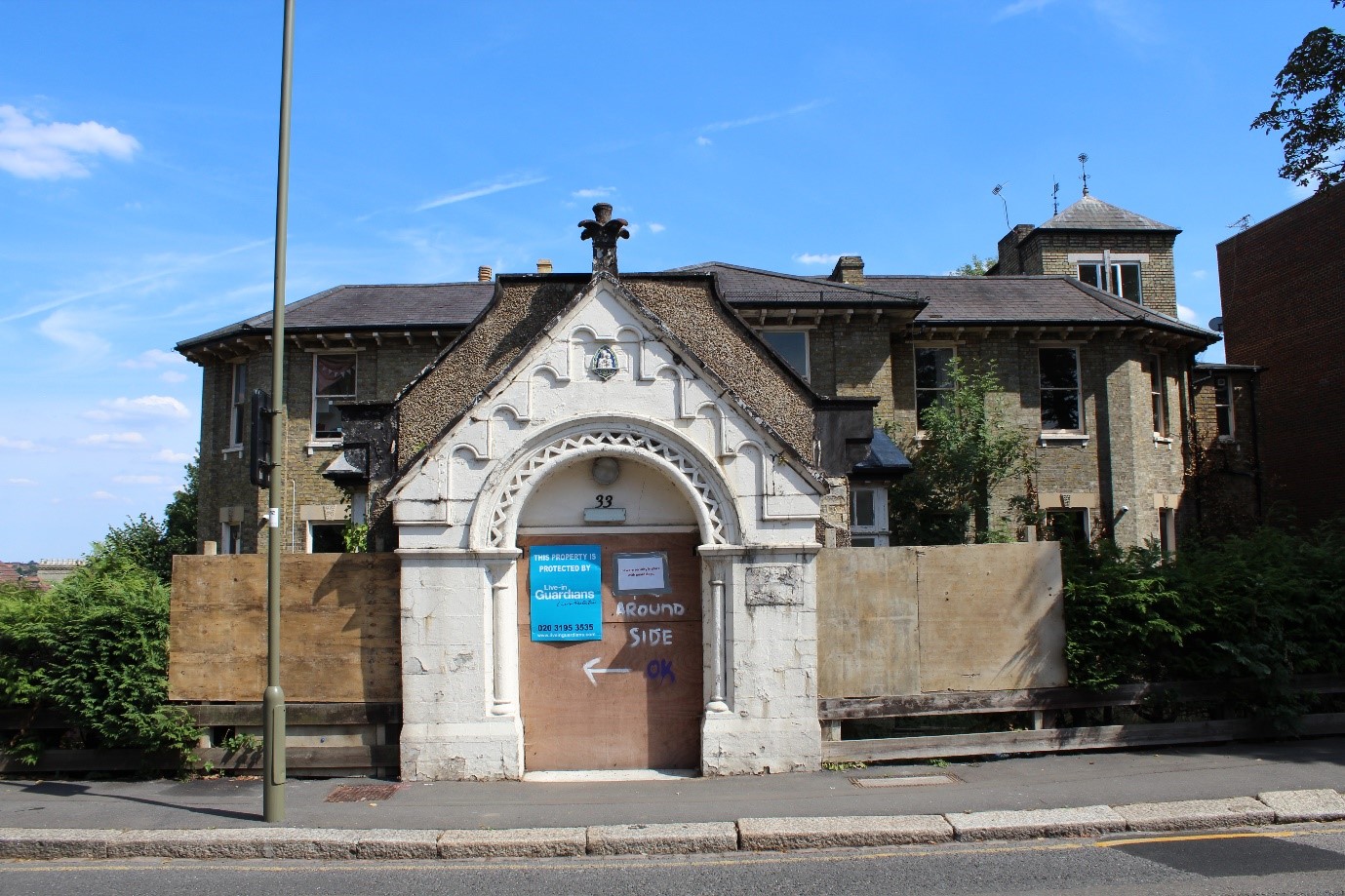 Urgent action is needed to save 33 Lyonsdown Road following Barnet Council’s recent decision to allow its demolition. Together with local residents, the Barnet Society has been campaigning since 2017 to save this beautiful Victorian villa but the owners have used the permitted development route to apply to knock down the locally listed building.

Local residents are horrified that the council has allowed demolition of one of the finest buildings in New Barnet. One resident wrote that the proposed demolition was ‘very very sad … devalues [the] area and our cultural history means nothing.’ She added: ‘nothing seems to matter but building more soulless flats.’

We need your help to persuade the owners, Abbeytown Ltd, to change their plans to bulldoze this much-loved building, which they want to replace with a block of flats. The Barnet Society has written an open letter to Abbeytown to ask them to reconsider, which you can view here. We asked them to meet us and local residents last year to talk about the scope for a conversion scheme, but we heard nothing. Today we renew that call and invite you to write to the company at their head office:

Our last report on the case was in April, when the owners’ latest plans for redevelopment were thrown out by the government’s Planning Inspector. That good news was then undermined by break-ins at the property. It was later boarded up.

In June, permission to demolish was granted under the permitted development (PD) procedure, allowing small-scale changes to buildings without the need for the full process. But PD has been expanded by the government in all sorts of ways. The shocking decision to allow the demolition of 33 Lyonsdown Road was made, Barnet Council admitted, ‘by default’. It was not taken on the merits of the case on planning grounds; nor was it referred to the Planning Committee. The officer handling the case told the Society that, while we were welcome to submit comments, the Council was ‘not able to make our own assessments or consider comments from any parties in this determination’.

We highlighted the risk to the building early last year, saying the permitted development procedure means that the Council cannot consider keeping a locally listed building if a proposal to replace it is submitted. That process is enshrined in the National Planning Policy Framework. We told the Council that they could make sure that the decision couldn’t be taken away from them like this by imposing a block on demolition via an Article 4 direction. Councils – Barnet included - use these all the time to protect conservation areas and other historic assets. Barnet refused. We asked Councillors to intervene and they said there was nothing they could do. Their inaction runs counter to the Council’s recent declaration of a climate emergency, given the needless release of embodied carbon as a result of demolition and rebuilding.

The building is the last remaining of the large architect-designed houses of the 1860s which set the character of the Lyonsdown area. The house has featured in multiple Barnet Society webposts over the last few years and was picked up by the Victorian Society, SAVE Britain’s Heritage and the Nooks and Corners column in Private Eye.

Local historian Dr Susan Skedd researched the fascinating history of the house, discovering who designed it – Arthur Rowland Barker, an architect with a national-level practice, who settled in Southgate and was a prominent figure in the area – and the later history of the house when it was a refuge home run by the Foundling

Below: The Renaissance-style plaque of the Madonna and Child over the main door to the house 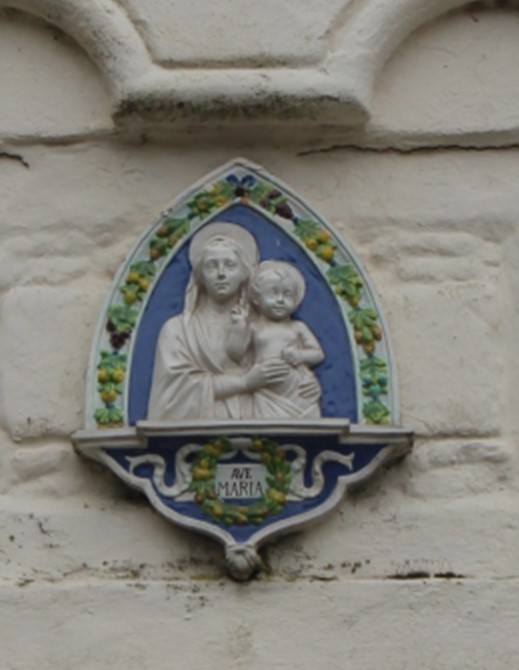 Today, the house is boarded up and down at heel. What a contrast with how it looked less than a decade ago, when the window frames were smartly painted, the lawns mown and the hedges clipped. It was then in the ownership of the Roman Catholic Society of African Missions, who in 2015 sold it to Abbeytown Ltd, a Finchley-based property development firm, whose directors include Simon Gerrard, Managing Director of Martyn Gerrard estate agents. 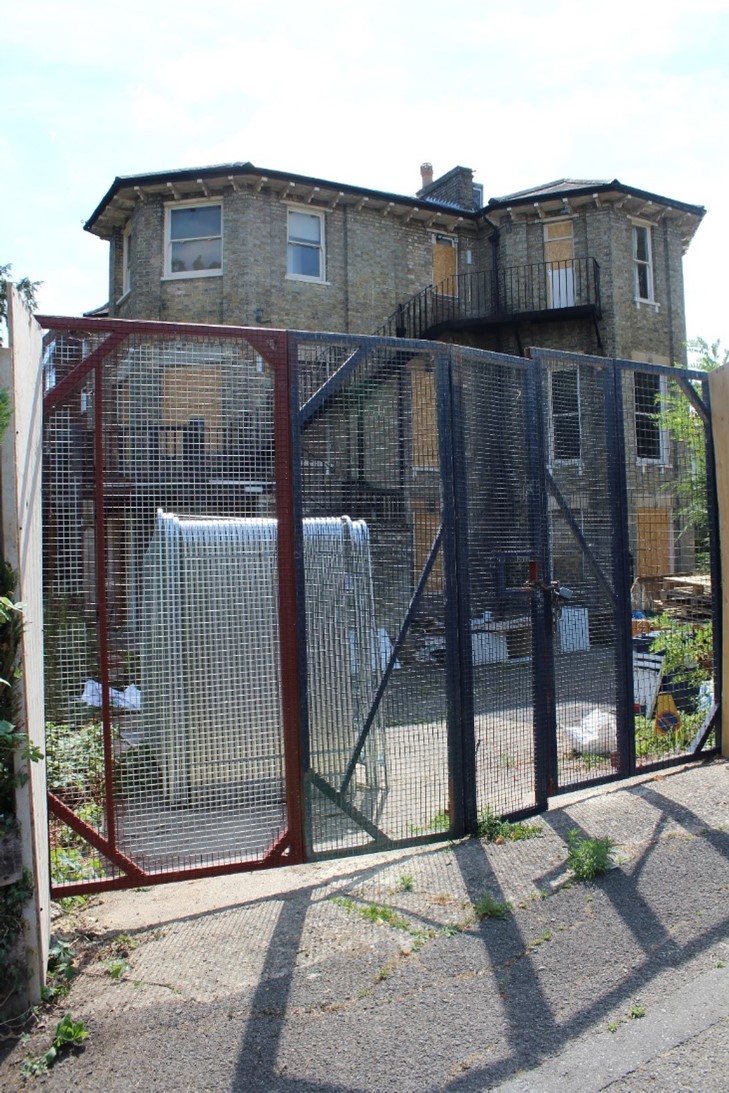 The Barnet Society is convinced that such a well-built house could be repaired. Local residents agree, as did the property guardians who lived there until last year. They loved the place and had made it a haven for ‘boho creatives’. When Abbeytown gave the guardians notice to quit, they told them that it was no longer safe to live there because of the condition of the building. Now the company says the building has two tenants living there.

Abbeytown have not said what they intend to build in its place after demolition. They will need planning permission for that. Their last two applications to put up a block of flats were turned down by the Council. On both occasions, Abbeytown appealed but Barnet’s decisions were then endorsed by Planning Inspectors. It is deeply saddening that Barnet’s officials should roll over so easily this time.

The Barnet Society has argued all along that this striking landmark building with its elegant interiors should not be demolished but repaired and converted to flats. There is scope for a sympathetic extension or a newbuild element in the garden among the splendid trees. Local people have clearly voiced their view that another block of flats is not what they want to see.

Our campaign to save the building has attracted the support of national heritage bodies. The Victorian Society has written: ‘The Victorian Society is fully supportive of the Barnet Society and enthusiastically echoes its continued calls to see this handsome, locally significant building preserved and sympathetically adapted for future use. Although the demolition of the building is now permitted, while it still stands, it is not too late for a change of approach to the redevelopment of the site’.

SAVE Britain’s Heritage commented: ‘SAVE is disappointed by Barnet’s Council’s decision not to resist the demolition of this attractive villa, a building the Council only recently added to its list of locally listed buildings.  The case exemplifies the misuse of permitted development rights to demolish structurally sound historic buildings, regardless of their potential for re-use and conversion. This villa could be converted to provide much needed and characterful housing, making use of the remarkable interior features that survive.  Instead these will now be condemned to the rubbish tip.’

Please copy us into any correspondence with Abbeytown at This email address is being protected from spambots. You need JavaScript enabled to view it..