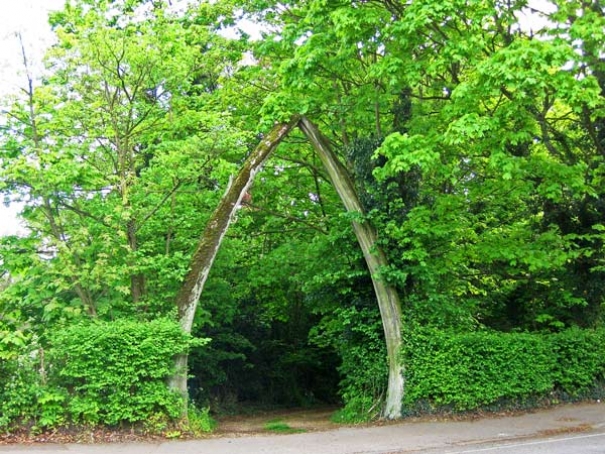 Wood Street's whalebones are 75 years in situ and still in good shape
Seventy-five years ago workmen from a local building contractor, W. Foster & Sons, were asked to complete a highly unusual task: they had to restore the unique appearance of one of Chipping Barnet’s oldest residences.

Two massive jaw bones from a ninety-foot-long blue whale captured in the South Seas had been shipped from Norway to Hull and then delivered to Wood Street by lorry.

The two jaw bones, twenty-four feet long and each weighing three-quarters of a ton, had to be erected to form an archway at the top of the drive leading to Whalebones, a two-hundred-year-old house hidden in woods midway between Wood Street and Barnet Hospital.

They were a replacement for a set of jaw bones which had previously formed a gateway to the house since the 1860s or perhaps even earlier; the name Whalebones had first appeared on a map in the 1872.

In May 1939 it took half a dozen workmen, under the direction of the builder, Mr Foster, all day to manoeuvre the gigantic jaw bones into place.

The first task was to extract the nerves from each bone. By sustained effort, using the contractors’ lorry and wire ropes, they managed to pull out sinews of several feet in length.

Such was the stench of rotting flesh that the many spectators who had gathered in Wood Street kept their distance. Each jaw bone had to be set in six feet of concrete and then the workmen used ladders, ropes, chains and pulleys to cajole them to form a perfectly symmetrical arch.

Although today the weather beaten jaw bones are showing a few cracks and are covered in places with moss, they appear sturdy and remain firmly in place; they give every indication they could last as long as, or even longer than their predecessors.

Motorists travelling along Wood Street often miss the jawbones, especially now that the trees are in leaf and much of that side of the road is filled with parked cars.

Pedestrians get a far better view, and might like to renew an old Chipping Barnet custom: according to local legend it was good luck to walk under the archway and make a wish.

..the house was built in 1815 and the first reference to it being named Whalebones was on a map dated 1872

Whalebones was the home for many years of Miss Gwyn Cowing whose family owned the Barnet Press. When the previous whalebones archway had to be removed because it was unsafe, she was determined to keep up the tradition and asked her architect to seek the advice of staff at the Natural History Museum in London.

They put him in touch with a whaling and sealing company in Norway. Miss Cowing related what happened next in a letter to Hertfordshire Countryside:
“The company obligingly promised a pair of whalebones and, sure enough, they arrived one cold May morning on a lorry from Hull. They had been shipped there from Bergen, which they had reached from the South Seas.

“They had a very pronounced odour and we found that this was mostly caused by the rotting nerve and blood vessels discernible in a cavity. This matter was extracted by driving forward a lorry affixed thereto.

“The Norwegians wrote charming letters in excellent English and would accept no payment for their part in the transaction.”

In its account of the installation of the replacement jaw bones, a reporter for the Barnet Press suggested there was a connection between the original set of bones and a house on the opposite side of Wood Street which had a large flagpole in the garden.

However, Captain Fyson, the owner of the house, denied having brought the bones back to Barnet. He thought they might be connected to the famous polar explorer John Franklin (1786–1847) who had once lived in Whalebones and who, according to local legend, had installed the first set of whalebones sometime in the 1830s.

The following week’s edition of the paper offered an alternative version: Frederick Brown, who lived at 92 Wood Street, said his sister was married to Mr Easton, a Thames waterman, who had lived at the house and had started the tradition.

Mr Easton had joined the firm of Smith & Sons, whalebone and sealskin merchants, who plied their trade from the Thames, and he obtained a pair of whalebones which it was thought were erected in the 1860s and gave the house its name.

Records at Barnet Museum suggest the house was built in 1815 and the first reference to it being named Whalebones was on a map dated 1872.

Over the years countless Barnet youngsters have marvelled at the size of the jaw bones from a blue whale, the largest species captured in the South Seas.

Angela Morris of King’s Road, Barnet, remembers that as a seven-year-old in the 1950s she attended a Brownie pack that met in the barn at Whalebones.

“In those days there were another two sets of whalebones, only much smaller. One was at the gateway to the house and one that had fallen down beside the path that went to the barn where the Brownies met.”