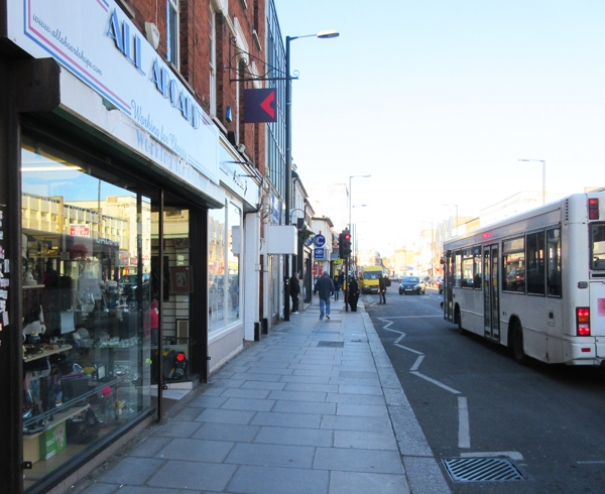 Barnet Council hopes that the built-out pavement, which would result in the loss of seven parking spaces, will improve comfort and safety for pedestrians, and provide room for benches, litter bins and tree planting.

The Barnet Society has been campaigning for some years, together with the Barnet Town Team, for improvements that would help to make the High Street more attractive.

Traffic engineers say that building-out pavements and reducing the number of cars pulling in and out of parking spaces usually speeds the flow of traffic.

Funding would be provided under the London Implementation Plan, administered by Transport for London, for assisting with improvements in the London boroughs.

The aim is for the High Street pavement build-out to go out for public consultation at the end of January, for a three-week period, and subject to any further modifications, the scheme would qualify for the current round of LIP funding which closes at the end of March.

The plan shows that the pavement build-out would extend from the Post Office all the way to just beyond the pedestrian crossing outside the Spires shopping centre entrance, allowing for the installation of benches, bins, cycle hoops and the planting of up to 18 trees.

As part of the scheme, there would be the loss of seven parking spaces, reducing to 56 the number of parking spaces along the entire length of the High Street, from the tube station to Hadley Green.

There would also be the loss of the High Street loading bay situated close to the  Union Street junction, but two new loading bays would be established, one in Salisbury Road and the other in Union Street, to assist deliveries to High Street shops.

Inset in the additional paving would be space for slabs marking the route of a possible heritage trail from Barnet Museum towards the site of the Battle of Barnet.

Although traffic engineers are confident that pavement build-outs do not reduce the speed of traffic flow, there are potential drawbacks.

The two pedestrian crossings, close to the Post Office and outside the Spires, would be shortened allowing a speed-up in the timing of the traffic lights, which might inconvenience some pedestrians.

Build-out pavements do mean there is less room for cyclists, and can have unforeseen consequences at road junctions.

Although traffic turning into Union Street would probably not be affected, a build out at the exit from Salisbury Road might make it more difficult for buses turning right into the High Street.

The latest proposed make-over follows a redesign four years ago of the garden beside Church Passage, the installation of seating, and the planning of trees in the High Street, from Barnet Police Station towards High Barnet tube station.