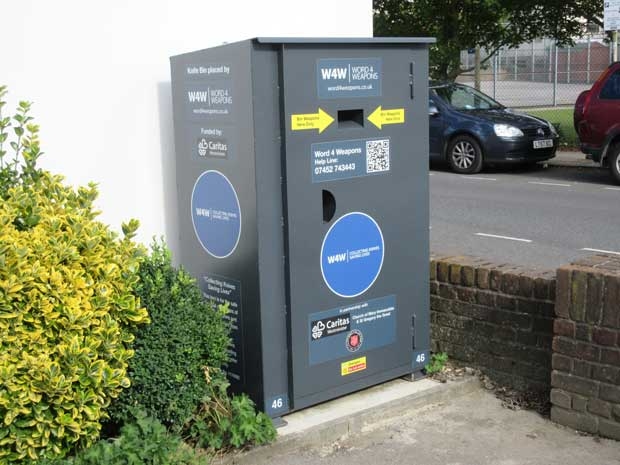 The knife bin in Union Street
A large bin for the safe disposal of all bladed weapons and instruments has been installed in Union Street, High Barnet, in support of the drive to curb the rise in knife crime.

“Collecting knives, saving lives” is the slogan of Word 4 Weapons, which says it is the UK’s leading weapons surrender charity.

It has sited the knife bin next to the pavement but inside the driveway and pathway beside the Roman Catholic church of Mary Immaculate and St Gregory the Great.

The message could not be clearer: “Bin weapons here. This box is for the safe disposal of all forms of knives, weapons and bladed DIY tools from your home.”

Most of the knife bins installed by Word 4 Weapons have been placed in inner London, but there are bins nearby at both Boreham Wood and Edgware.

The location of bins is designed to encourage the surrender of knives and they are “primarily positioned away from CCTV allowing weapons to be deposited anonymously”.

Advice can be obtained from the help line number on the box: 07452 743443 and information on bin location can be found at https://www.word4weapons.co.uk/

Word 4 Weapons is extending its work across the UK.

“There are too many lives being lost through the use of weapons on the UK’s streets. We are playing our part in an attempt to save lives by installing knife bins across the country.

“To date, tens of thousands of weapons have been deposited in our bins and with your help we will collect many more.”

The Union Street bin has been funded by Caritas Westminster, the Catholic relief and development agency for the Diocese of Westminster