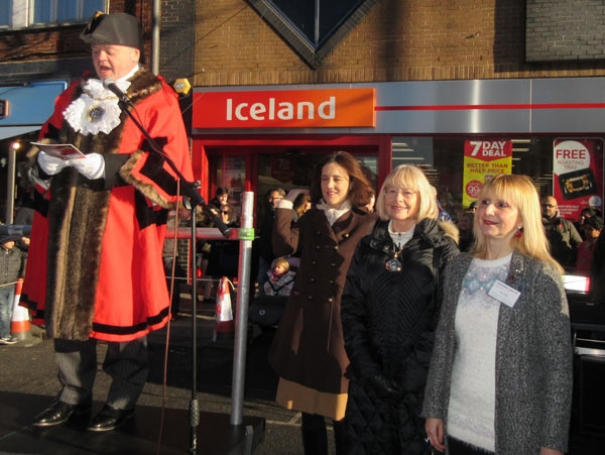 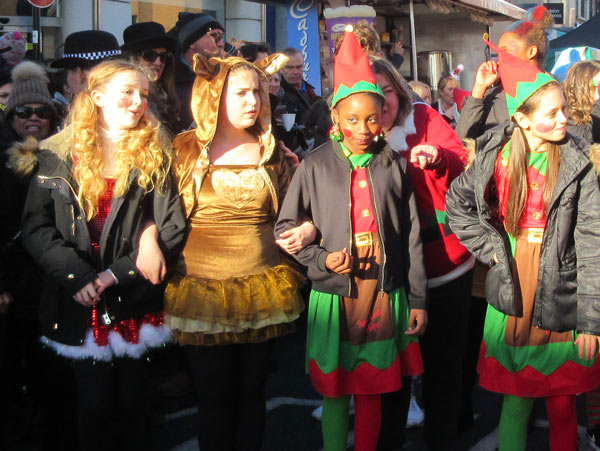 Councillor David Longstaff, Mayor of Barnet, opened the proceedings after the arrival of the Christmas Fayre Princess, 15-year-old Mari Sawock in a vintage Rolls Royce, backed up by a throng of dancers from the Bull Theatre and other street entertainers.

A packed programme of events included an afternoon of classical music at Barnet Parish Church, a Punch and Judy show in the churchyard, an exhibition by the Barnet Guild of Artists in the Tudor Hall, a craft market in Church Hall, three performances of the children’s show The Forgotten Toys at the Bull Theatre, and live music at the Butchers Arms.

Stalls manned by local organisations included a display for the Barnet Society of pictures of recent finds in the search for the site of the Battle of Barnet, free fruit on the stall of the Friends of Barnet Market, and jars of honey on sale at the stall of Barnet and District Beekeepers Association.

Yet again the Fayre is better than ever

In opening the Fayre (4.12.2016), Councillor Longstaff paid tribute to all the volunteers who had helped organise what he said had become a great annual event in High Barnet.

He also thanked the Christmas Fayre committee for agreeing to support the Mayor’s two charities, the Noah’s Ark Children’s Hospice and the Dementia Club UK. 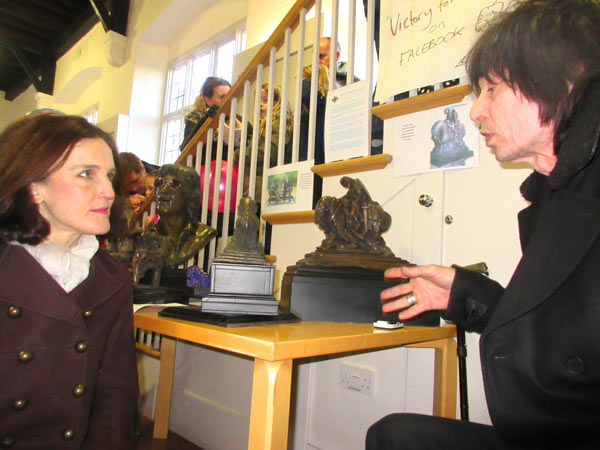 In her welcome to residents and visitors, the Chipping Barnet MP, Theresa Villiers, said the Fayre marked the official start of the Christmas season for High Barnet and its High Street.

“Yet again the Fayre is better than ever, and it’s a wonderful opportunity for local people to support the community and local traders.”

Among the events visited by Mrs Villiers was an exhibition staged by the Barnet Guild of Artists in the Tudor Hall, where she was welcomed by the chair, Nichola Peasnell, and admired the work of Barnet sculptor, John Somerville.

Mr Somerville showed the MP a maquette of his piece Pyrrhic Victory, a depiction of the despair of a weary knight on horseback after the 1471 Battle of Barnet.