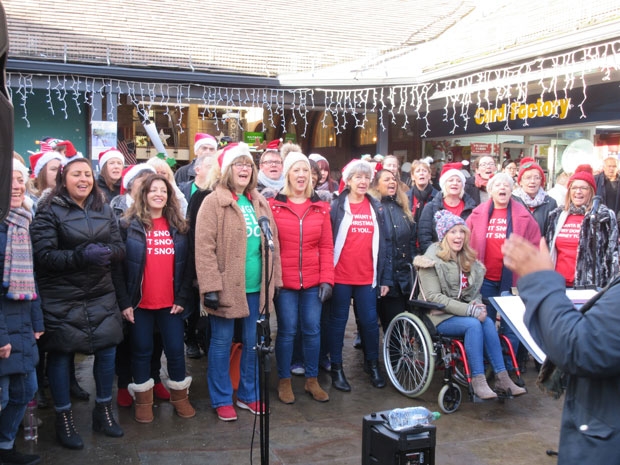 North London’s Big Choir entertained the crowd at the Spires shopping centre
Deciding to close Barnet High Street for the annual Christmas fair was an inspired initiative that has paid handsome dividends in sustaining a great community spirit says the Mayor of Barnet, Councillor Caroline Stock.

When she opened this year’s fair (Sunday 1 December) by cutting a red ribbon close to the parish church, Councillor Stock recalled how she had been a regular visitor to High Barnet’s Christmas festivities since the 1990s.

“What began with some stalls in the Spires shopping centre has now become one of the highlights of the year for local organisations and charities and it is greatly appreciated by their supporters and local residents.

“Persuading Barnet Council and the Police to close the High Street to traffic for the day was a very brave thing to do and over the years it’s helped bring the community together just before Christmas.”

Barnet Borough Arts Council and the Bull Theatre took over the task of organising the fair in 2004 and since then she said it had gone from strength to strength.

“This is a free event run by volunteers and helps to promote the High Street and its shops, cafes and restaurants as well as raising the profile of local charities.”

After cutting a red ribbon across the High Street, Councillor Stock and her consul and husband, Dr Richard Stock, were marched off by the band of the 1st Barnet Boys’ Brigade and Girls’ Association.

This is a free event run by volunteers and helps to promote the High Street and its shops, cafes and restaurants as well as raising the profile of local charities

This was the third year that the band, under its leader and conductor, Alan King, had taken part in the Christmas fair and the 21 band members – and their instruments – were kitted out for the seasonal celebrations.

The Mayor’s next assignment was the official opening ceremony in a marquee in front of Barnet and Southgate College where she was welcomed by High Barnet Councillor David Longstaff.

She urged everyone to visits the events and stalls being held at the parish church, the Bull Theatre, Barnet Museum and other locations all along the High Street and in the Spires shopping centre.

Crowds in and around the marquee were entertained by children from the Bull Theatre’s Saturday and Sunday theatre school, who together with cast members from this year’s pantomime, Aladdin, sang a selection of songs and carols.

The Big Choir of North London, under its leader Sharon Czapnik and musical director Angela Moikeenah, were among the choirs performing in the Spires and the parish church.

At the bandstand by the Spires’ Stapylton Road entrance, entertainment was provided by members of Barnet Teenage Market.

1960s covers of the Beatles, Monkeys and Kinks were in the repertoire of The Skys, a teenage band formed by three pupils at Wren Academy, North Finchley.

Bob Burstow, founder of the teenage market, said the Christmas fair was a great opportunity for a young band to gain confidence.

Judging by the applause for The Skys – singer and guitarist Frankie Adams (15), guitarist Denis Filby (14) and drummer Francis Wilson (15) – there was no shortage of support for their packed programme.

More in this category: « Children have their say on saving the planet Monken Hadley celebrates its role in Barnet history »