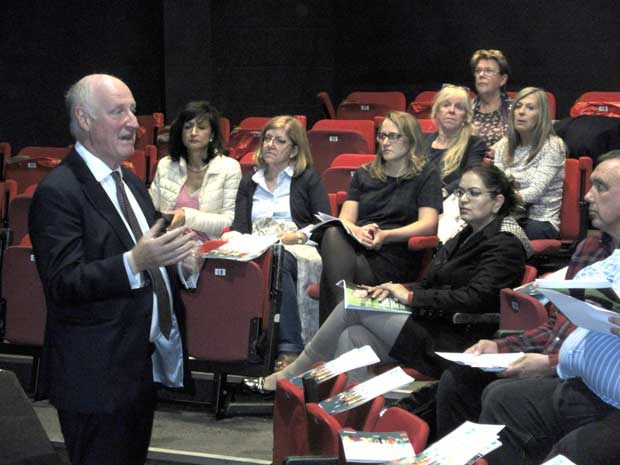 Richard Cornelius, leader of Barnet Council fielding questions at an Engage Barnet event at the Bull Theatre
Problems caused by uncontrolled street drinking in High Barnet and rough sleeping in shop doorways along the High Street topped the issues raised at an Engage Barnet question time.

After a litany of complaints about drunken behaviour and litter-strewn pavements, the Conservative leader of Barnet Council, Richard Cornelius, promised he would do everything he could to ensure a greater police presence in the town centre and more regular street cleaning.

During a two-hour session at the Bull Theatre (11.9.2018), Mr Cornelius faced a barrage of residents’ complaints about a lack of police action to deal with drinking and disorder and a rapid deterioration in street cleanliness.

He told the meeting that Barnet paid more towards the cost of the Metropolitan Police than any other London borough, but Barnet was being allocated far fewer police officers per capita than any other borough.

“This has got to change. I hope whingeing by me to the Mayor of London (Sadiq Khan) will get us more police, and I can assure you I will most certainly be doing that.”

This has got to change. I hope whingeing by me to the Mayor of London (Sadiq Khan) will get us more police, and I can assure you I will most certainly be doing that

The session opened with a complaint from Pina Griffin about the sad state of the High Street and the sitting area at the rear of the Spires shopping centre. She said there had been a rapid deterioration over the last two years.

“We now have homeless people sleeping in the High Street and urinating outside shops. There has also been a steady increase in street drinking.

“We have become so frightened of political correctness that we don’t move them on and we now have a whole community of homeless people living in our High Street.”

Gail Laser, founder of Love Barnet, described how residents had been shocked to see homeless people urinating and defecating. “Because of the lack of action women are frightened to walk behind the Spires shopping centre. The High Street is filthy, and retailers are suffering.”

Another resident complained about groups of street drinkers who sat in Church Passage.

“It is very unpleasant to find street drinkers sitting in the dark in Church Passage. People really are intimidated by this sort of behaviour.  We need a more visible police presence in the High Street.”

A follow-up question raised the issue of rough sleeping in High Street shop doorways and the need for Barnet Council to do more to help homeless people.
Mr Cornelius criticised the level of police cutbacks by the Mayor of London and said it had been a mistake to close the front counter at High Barnet police station last November.

“Shutting the police station to the public – while there are still police officers inside the building – sends out entirely the wrong signal.

“Barnet gets the lowest amount back per capita in police spending, but I believe there is enough money in the police budget to ensure we have more police in Barnet and I can, and I will, whinge to the Mayor of London.”

He believed Barnet had also lost out from the creation of a combined police command centre for the boroughs of Barnet, Harrow and Brent. “There are 1,000 police officers for the borough, but because of shift duty, at best there will be only 200 on duty on any one day in the whole of the borough.”

Part of Barnet’s problem was the perception that it was a borough with a low crime rate and he appealed to residents to make sure that crimes were reported to the police, because the more evidence there was of higher crime, the more it would strengthen his hand as council leader.

Mr Cornelius insisted that the council’s policy of outsourcing services to Capita was not the reason for the problems with street cleanliness.

“Street cleaning is a directly run service, with council employees, but I understand the need to ramp up the cleanliness of our streets as a higher priority.”

..paying an extra £140 a year would be a
small price to pay to get rid of Capita

In face of a strong of complaints about the difficulties faced by residents in dealing with out-sourced services operated by Capita, Mr Cornelius insisted that every householder was £140 a year better off in council tax because of the savings that were being made.

His answers were met with noisy protests and there was applause when several residents said they would happily pay more council tax for better services in the borough, and “paying an extra £140 a year would be a small price to pay to get rid of Capita”, said one resident.