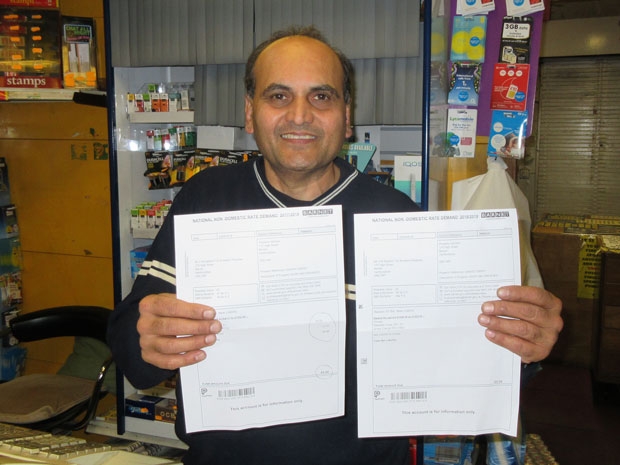 Vince Gadhavi with the revised zero demand from Barnet Council
Barnet Council has backed down from its decision to charge a High Street newsagent an extra £1,800 a year in council tax for having a free-to-use cash machine installed in the shop window.

There were smiles all around in the Paper Shop – formerly Smokers’ Paradise – when proprietor Vajsur (Vince) Gadhavi opened the post and saw that the demand had been reduced to zero.

He thanked the Barnet Society for having publicised his plight and said that once news of the shop’s nightmare went on the society’s website, and was picked up on line on social media, he had been inundated with offers of support.

“We know that Councillor David Longstaff took up our case, and especially our shock at being landed with a £6,200 bill back dated to 2015, and we want to thank him and the rest of our customers in High Barnet for having rallied round.”

We know that Councillor David Longstaff took up our case, and especially our shock at being landed with a £6,200 bill...

The cash machine was installed by NoteMachine Ltd in February 2015, but it was not until the demand for £6,200 arrived in the post in early September, that he realised that without his knowledge Barnet Council had increased the shop’s rateable value by £3,750 – to a new total for the shop of £29,000.

A week ago, Mr Gadhavi was told he had seven days to pay the arrears or the council would start legal proceedings.

Although he has yet to received confirmation that the demand for £1,815 for 2016-17 and £904 for 2015-16 have also been dropped, he believes the council will have to be consistent and cancel all charges.

When the cash machine was installed, NoteMachine told Mr Gadhavi he would be paid commission when the machine hit 6,000 cash transactions a month – a target that has never been reached.

“We haven’t received a penny income for having the cash machine, but we have wanted to offer customers a service and we feel we should not be penalised for helping to attract custom to the High Street.

“Our real grievance was that we were never notified by the council in 2015 that installation of the cash would increase the rateable value of the shop and everyone who has looked into this case on our behalf agrees that it is totally unfair to demand arrears dating back to 2015 when there had never been any warning or notification of the liability.

“We have ended up subsidising the machine – it is costing us about £200 a year in electricity and insurance – so we are offering High Barnet shoppers a service when it is being reported that cash machines are disappearing from High Streets across the country at a rate of 250 a month.”

Currently the Paper Shop has to pay a council tax bill of £1,112 a month, and as Mr Gadhavi said that he has paid on time for the 31 years he has been in business, he did not expect to be treated in this way by the Council.