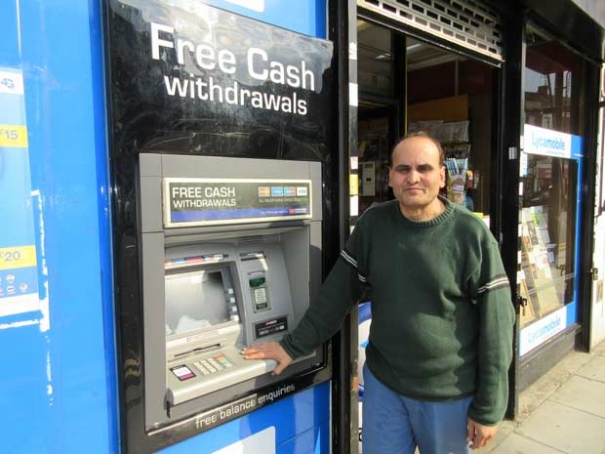 Barnet Council has issued a £6,000-plus council tax demand for proprietor Vince Gadhavi
Offering High Barnet residents and shoppers a free-to-use cash machine is proving an expensive nightmare for the Paper Shop in the High Street.

Proprietor Vajsur (Vince) Gadhavi, who has received no revenue at all from hosting the cash machine for the last 42 months, plans to appeal against the revaluation of his premises, formerly known as Smokers’ Paradise.

The cash machine was installed by NoteMachine UK Ltd in February 2015 and Mr Gadhavi was assured he would be paid commission once the machine hit 6,000 cash transactions a month – a target that has never been reached.

“Up to now we have been prepared to subsidise the cost of the electricity needed for the cash machine – about £200 a year – but we’ve just been hit for six by this back dated council tax bill.”

Because the cash machine faces on to the High Street, offering the public a service, Barnet Council has increased the Paper Shop’s rateable value by £3,750 – to a new total for the shop of £29,000.

This has resulted in an additional council tax bill for this year of £1,800. With arrears dating back to February 2015, the shop faces a total additional bill of £6,266.

Mr Gadhavi, who has been proprietor of the Paper Shop for the last 31 years, says he feels badly let down both by NoteMachine and Barnet Council.

“We were never told back in February 2015 that hosting a cash machine would increase the rateable value of the shop, and now, without any advance warning of the revaluation, we have been hit with a bill for over £6,000

“This is a punitive amount for small trader and quite unreasonable. Surely the Council should have warned us long ago that the shop might be revalued and then we could have decided whether to continue hosting the cash machine.

“We have been providing a service to the public without any income for the shop. At least we deserve a visit from one of the council’s valuation officers to explain what has happened.”

Currently the Paper Shop has to pay a council tax bill of £1,112 a month. The backdated additional bill for the cash machine would push up the overall total to be paid in the current financial year by over 50 per cent.

Cash machines are being lost from High Streets and shopping centres across the country.

Most are being withdrawn by the banks amid a wave of branch closures, but the growing practice of local councils to impose council tax on cash machines in High Street shops and petrol stations is resulting in the disappearance of many more.