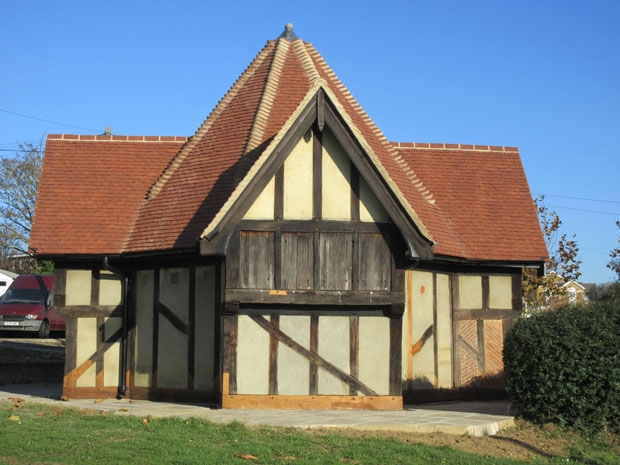 The Physic Well restored
Barnet’s historic wellhouse, which houses one of the best-preserved medicinal wells in the country, has been restored to its full mock-Tudor glory.

After months of restoration work, which has included a replacement roof of hand-made clay tiles and repairs to the oak timbers, the physic well was officially re-opened by the Mayor of Barnet, Councillor Reuben Thompstone.

The wellhouse, in Well Approach – just a short walk from Barnet Hospital -- was constructed in 1937 to protect the 17th century dis-used well and its spring.

In recent years the structure, which has grade II listed status, was in such a sorry state of disrepair that it was placed on Historic England’s at-risk register.

The cost of the restoration work, originally estimated at £150,000, was met by Barnet Council, a grant from the Historic England and a donation from the Heritage of London Trust.

The renowned diarist Samuel Pepys – who visited the well in July 1664 – was perhaps the most celebrated consumer of the chalybeate spring water that was once fashionable to drink, and which attracted the gentry to Barnet because it was said to have healing and other medicinal qualities.

Following completion of the restoration work, Barnet Council intends to pass control of the wellhouse to Barnet Museum on a 50-year lease.

Once legal procedures have been completed, the museum intends to arrange regular opening times so that the public, interested groups, and school parties can see inside the wellhouse and descend the steps to the well which is still fed by clear spring water.

“Our aim is to have additional open days for special interest groups, schools and for Samuel Pepys appreciation societies around the world which have all expressed an interest in seeing the well which Pepys visited and which he described in his diaries.”

The first mention of the discovery of Barnet’s spring was in 1586 in William Camden’s book Britannica. In 1650, there were reports of the Barnet water being over-exploited and in 1656 the Barnet Vestry appointed a well-keeper.

Samuel Pepys “rode north to see the wells” in July 1664, and after lunch at the Red Lion he continued to the well “and there I drunk three glasses and went and walked and came back and drunk two more”.

“The woman would have had me drunk three more, but I could not, my belly being full – but this wrought me very well; and so, we rode home...and my waters working at least seven or eight times upon the road, which pleased me well.”

In 1667, Pepys visited the well a second time when he “took only three glasses of well water” before retiring to the Red Lion, where he “ate some of the best cheese cakes I ever did eat in my life.”

Mr Jordan said the work had proved more costly than was originally estimated because of the extent of rotten timbers and crumbling brickwork. When the ceiling collapsed, there was additional work, but traditional materials had been used throughout.

In addition to a new roof made up of old-fashioned clay tiles, there was new replacement brickwork and French oak had to be used because of a shortage of English oak.

Originally the well was on what was once Barnet Common, which stretched from Wood Street to Dollis Valley, and the mock-Tudor wellhouse was constructed when Barnet Urban District Council acquired the land and built the Wellhouse estate of council houses.