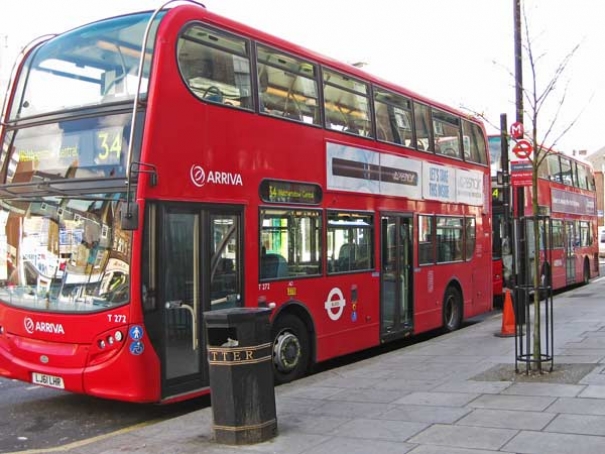 If the No. 34 terminated at the Arkley public house The Red Lion stop could be used for other buses
A new layout for High Barnet’s bus stops could benefit passengers and speed up traffic flow.  Transport for London has been asked to consider reorganising the bus stops at the top of Barnet Hill in order to reduce traffic congestion around Barnet parish church and to provide easier access for bus passengers.

Mrs Theresa Villiers, MP for Chipping Barnet, has taken up suggestions which were made at her annual question and answer session with members of the Barnet Society.

She has asked TfL to examine a possible new layout for bus stops that could be introduced by slightly extending the final destination of the 34 bus route.

Instead of terminating as at present just below the Red Lion and then executing a U-turn in front of St John’s Church – often holding up traffic in the process – members have suggested that buses providing the 34 service should continue along Wood Street and then terminate at the Arkley public house.

Since the 307 service (Barnet to Brimsdown) was rerouted and now terminates at Barnet Hospital instead of the Arkley, there is now an empty bus lay-by on each side of the road at the Wood Street junction with Galley Lane, and also ample turning space.

She agreed that terminating the 34 at the Arkley, rather than the parish church, would help ease congestion at the top of Barnet Hill

If these two empty lay-bys at the Arkley could be used instead by re-routed buses on the 34 service (Barnet to Walthamstow Central), it would free-up the large lay-by just below the Red Lion which could then be used by some, or perhaps all, of the nine other bus services that currently have stops at the top of Barnet Hill.

By adding less than a couple of miles to the route of the 34 service, TfL could ease the flow of traffic at a frustrating and sometimes dangerous bottleneck while at the same time improving access and safety for bus passengers.

The lay-by used by the 34 service, which is alongside Barnet College’s beauty therapy centre, has ample room for three double- decker buses and could easily be used instead for setting down and picking up passengers on the routes which at present stop closer to the church.

Buses at these two stops frequently cause hold-ups when setting down or picking up passengers because they block the nearside lane, leading to a build-up of traffic waiting to bear either left into Wood Street or right into High Street.

Moving some or all of these stops to the lay-by vacated by the 34 would cut the congestion and be safer for passengers. By extending its route and eliminating the need for buses to make a U-turn in front of the parish church, it might also be possible to simplify the junction and reduce the number of bollards and signs.

For bus passengers, the freeing up of the lay-by just below the Red Lion would make alighting and boarding far easier. Sometimes the lay-by is filled by one or even two stationary buses and at other times it can be empty, which is hardly of any benefit to the many people waiting in the vicinity. 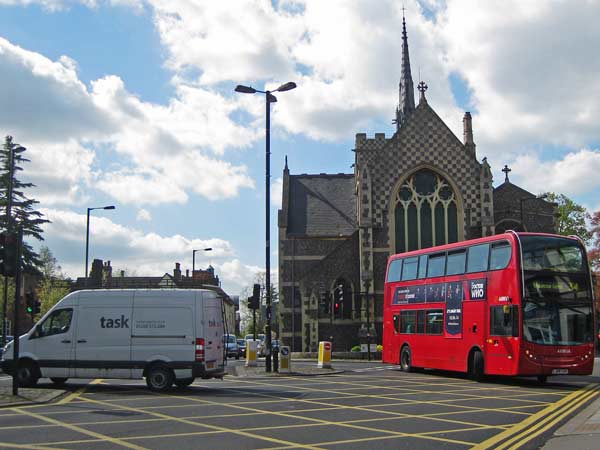 The pavement alongside the college building is much wider than it is nearer the church beside the Red Lion, and passengers would appreciate the comfort of being able to stand back from the traffic and have a better view of buses reaching the top of Barnet Hill.

Another advantage in rerouting the 34 to terminate at the Arkley is that it would provide an additional service to people who live on the Barnet/Arkley borders and who have felt disadvantaged by the re-routing of the 307. Likewise it would assist passengers on the 34 who might be heading for Barnet Hospital.

When these ideas were put forward at the Society’s annual question and answer session (28.3.2014) Mrs Villiers said she thought that a minor extension of the 34 route would have lots of potential advantages for the locality.

Many Arkley residents, especially the elderly, were disappointed by the loss of the 307, and its substitution with the 34 would be widely welcomed.

She agreed that terminating the 34 at the Arkley, rather than the parish church, would help ease congestion at the top of Barnet Hill, as would moving stops for other services to the vacated lay-by.

There would also be less clutter needed in front of the church if it was no longer a turning point for buses – and she thought this would improve the impact of St John’s Church as people reached the top of Barnet Hill.

Her request that TfL should consider whether it is possible to reroute the 34 has been sent to Leon Daniels, managing director of surface transport, and Mrs Villiers has promised to keep the Barnet Society informed of any developments.

More in this category: « Bin There? Loads of cash to improve Barnet’s traffic bottleneck »