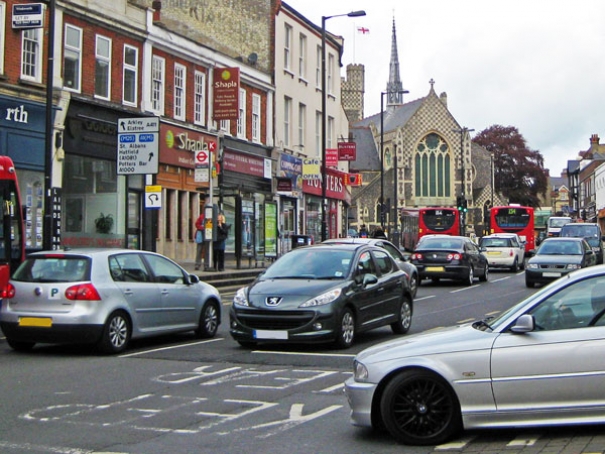 High Barnet traffic mayhem
Barnet Council has almost £150,000 available which could be spent immediately on improving the road junction at the top of Barnet Hill, if only an agreement could be reached on how best to ease traffic congestion and make it safer for pedestrians.

The existence of the unspent money has been revealed by the leader of the council, Richard Cornelius, in a letter to the Chipping Barnet MP Mrs Theresa Villiers.

Feasibility studies have been conducted by the council over the past three years to see if the High Street–Wood Street junction can be improved by restricting right and left turns, rationalising the traffic islands and improving the pavements.

But so far no action has been taken because councillors doubt whether any viable improvements can be made in view of the restricted space for both vehicles and pedestrians. 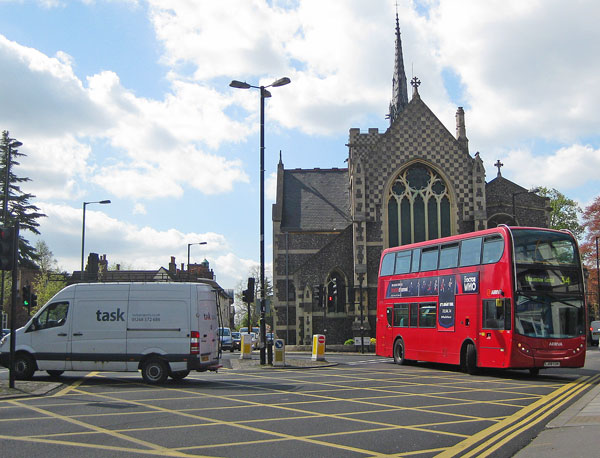 However, suggestions for improving the High Street–Wood Street junction by changing the layout for bus stops at the top of Barnet Hill were put forward by members of the Barnet Society at their annual question and answer session with Mrs Villiers.

She has written to Transport for London on the Society’s behalf, asking whether it would be possible to consider slightly extending the final destination of the 34 bus service, so that it terminated at the Arkley public house rather than in front of Barnet parish church as at present.

If the 34’s route was extended it would free up the large bus lay-by just below the Red Lion, which could then be used by some, or perhaps all, of the ten bus services that currently have stops at the top of Barnet Hill.

A re-routed 34 service could make use of the two lay-bys at the Arkley which have already been freed up by the re-routing of the 307 to terminate at Barnet Hospital. There would then be ample space for up to three buses to stop at any one time in the vacated lay-by alongside Barnet College’s beauty therapy centre.

Ten bus routes currently share two stops beside the Red Lion and if they could use the 34’s existing lay-by it would eliminate hold-ups caused when they set down or pick up passengers.

Because the buses block the nearside lane, they frequently cause a build-up of traffic waiting to bear either left into Wood Street or right into High Street.

Mrs Villiers has yet to receive a response from TfL but Barnet Council have acknowledged that £148,000 is currently available for improving the High Street–Wood Street junction and a further £190,000 could be made available over the next two financial years.

In his letter to the MP, Councillor Cornelius says the council received £91,375 for improving the junction in front of St John’s Church as part of the Barnet College redevelopment.

The money was to be spent as the council “sees fit” on improving the “public realm footway and improvements to Wood Street–High Street junction”.

Feasibility studies costing £27,000 were carried out but none of the suggested changes were adopted. Further studies were conducted after funds were received for Chipping Barnet under the Mayor of London’s Outer London Fund, but again no work was carried out.

A further contribution of £45,000 has been identified for highways improvements relating to access to the Barnet trading estate from the Park Road junction with the High Street; and another £40,000 is available from a TfL improvement programme.

In his letter Councillor Cornelius says the funding could be used to review previous feasibility studies and to examine bus stopping and standing positions, turning arrangements into Park Road and other measures to reduce congestion and improve “pedestrian facilities and streetscape”.

Despite the availability of funding, Barnet Council offers no change in its wait-and-see approach: “The problem with earlier proposals was that councillors were concerned at the blocking of some turns and the traffic implications of doing this. Whatever is done will not alter the constricted vehicle and pedestrian space.”

The Barnet Society is hoping TfL will make a positive response to the suggestions forwarded by Mrs Villiers and its committee will consider what further action can be taken given Barnet Council’s acknowledgement that considerable funds are available if agreement can be reached on a new layout for the bus stops and improvements to the junction.

More in this category: « New bus stops for High Barnet 34 bus route too costly to extend »