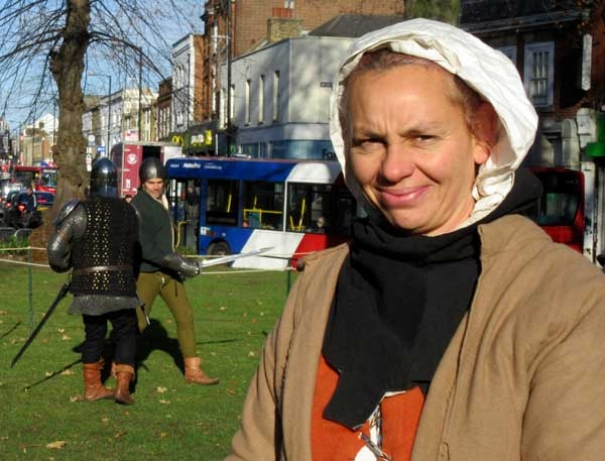 Camp follower Isabella Henman whose job it was to help dress soldiers in full armour and livery
A re-enactment of armed combat from the time of the Battle of Barnet of 1471 filled the garden in front of the parish church of St John the Baptist to promote Barnet’s role in the Wars of the Roses, as the launch of the Barnet 1471 Battlefields Society and to encourage efforts to discover more about the battlefield site.

Members of the Medieval Siege Society wearing armour and livery of the period laid on their display while inside the church there were talks on the history of the wider conflict – a confrontation that involved three kings, Edward IV, Henry VI and (the future) Richard III, two armies and one crown.

Isabella Henman, dressed in medieval clothing, was on hand to describe the role of the women camp followers who looked the noblemen and their armed soldiers.

Helping prepare a soldier for the battlefield requires the camp follower to know what they’re doing. It’s rather like changing a baby’s nappy....

She said the women would have done the cooking, cleaned the armour and livery, and then helped the men prepare for battle.

Her husband Kevin Henman – another member of the society – was in full armour and livery for the re-enactment. 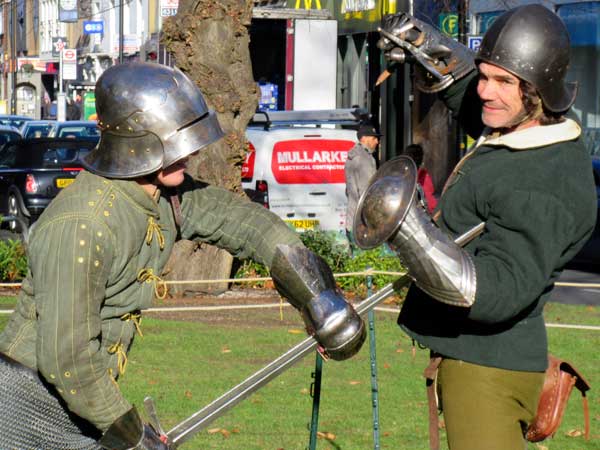 Re-enacting a scene, Addam Bayford (left) and Tim Oddy“Helping prepare a soldier for the battlefield requires the camp follower to know what they’re doing. It’s rather like changing a baby’s nappy – there is a process to be followed,” said Ms Henman.

“So when helping put on the armour, you have to start from the feet and then go upwards, in order to make sure everything is properly in place and the livery is correct.”

Ben Godden, another member of the society, said that the noblemen often tried to reduce the number of women camp followers because they could be a drain on an army’s resources, but they did have a vital role.

He said the society was only too pleased to be helping raise awareness of the Battle of Barnet and they were looking forward to taking part in other events connected with the Battle of Barnet Project, including a medieval festival that is to be held in Barnet over the weekend of June 9 and 10, 2018.

Inside the parish church there were talks by the historian, Mike Ingram, on the “Overmighty subjects of the Wars of the Roses” and by author Nathen Amin on his recent book on the House of Beaufort.

More in this category: « High Barnet’s budding food court A fun day for Barnet children »
back to top