Children have their say on saving the planet 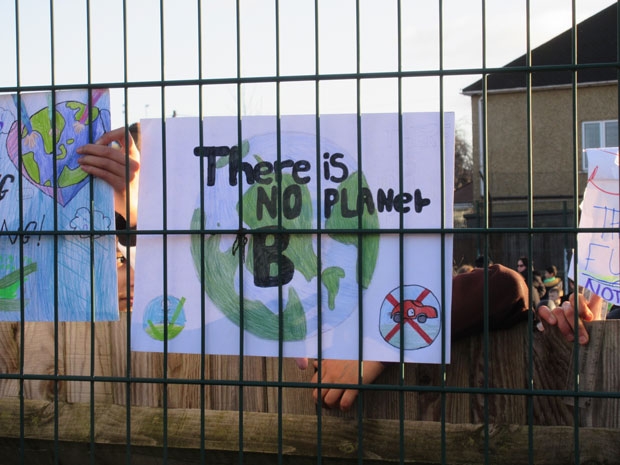 Children show their posters at the school gate
Motorists tooted their horns and pedestrians waved back when children at Underhill School held up their “Save Our Planet” posters all along the school fence in Mays Lane, Barnet.

Inside the playground around 500 children – each holding aloft their own individual hand-painted posters – chanted “Save our planet” to mark the campaign by the climate change movement, GlobalStrikes4Future.

As part of her world-wide campaign, the teenage Swedish activist Greta Thunberg has called for international support for Fridays For Future protests when school children are urged to join in without disrupting their school day.

The Underhill School demonstration was held for 20 minutes at the end of the school day and parents, who had been invited to attend, came along to show their support.

As they left for home, many of the children – aged from three and four and up to ten and eleven – were proudly holding on to their handiwork.

They wanted to express themselves in their own way and this was a fun way to do it.

Deputy head Nicola Hayles said the children had been really excited by the challenge to paint their own poster on saving the planet.

It had been a chance for teachers to describe the environmental challenges facing the world and explain why children across the country were joining protests.

“What was so impressive and engaging for the staff was that the children sensed they had a voice in what is happening in the environment.

“They wanted to express themselves in their own way and this was a fun way to do it.”

To maintain interest in environmental campaigning, children at the school are to help planting trees donated by the Mayor of London.

There will be an individual tree for each of the school’s classes.

“We think the tree planting will help the children understand what can be done to tackle global warming and it is their chance to engage in what is going on in the world.”